Under the skin of bears - Under the Skin of Endangered Animals

Back to Journal
Posted in Nature School

Under the skin of bears

It’s something most of us picture when we think of a bear in its habitat.

Dappled sunlight illuminating ancient woodland. Early morning mist dancing along the forest floor, like a calm tide ebbing and flowing between the trees. Or crisp white snow, glinting and sparkling in the sunlight, calm waters licking at the base of sugar-like icebergs. And silence, other than the huge paws of the polar bear crunching his way along the snow-covered land.

These habitats have been home to bears since the dawn of time. They’ve been a haven for them to live and thrive in. But with nature facing threats that are beyond their control, bears have had to adapt quickly to their changing habitats. 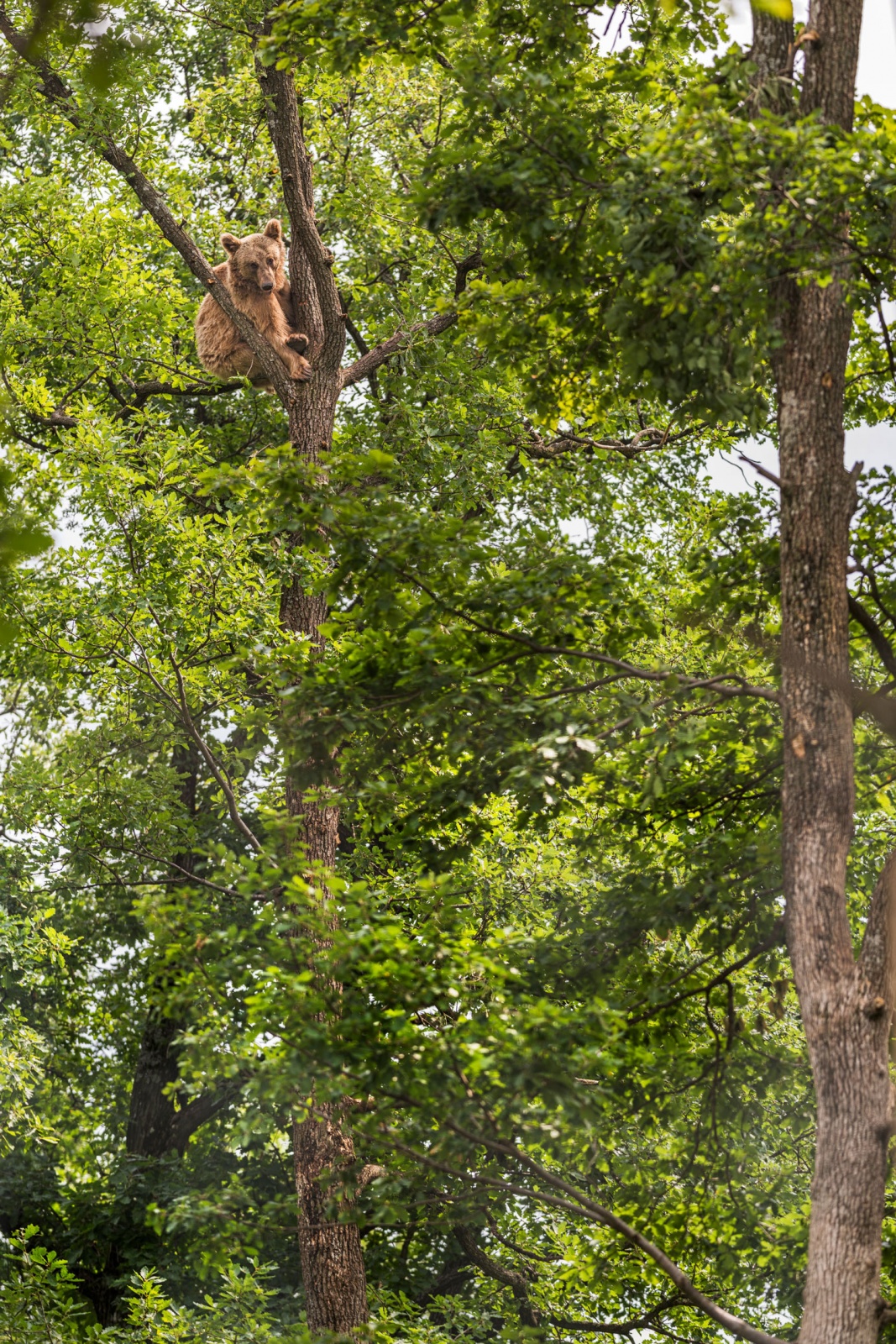 A brown bear takes to the trees in Romania. Image credit: Rosie Dutton

There are eight species of bear on our planet, with six of these being on the IUCN Red List of endangered species.

Common characteristics of modern bears include large bodies with stocky legs, long snouts, small rounded eyes, fur and short tails. Bears also have plantigrade paws (meaning they walk on the soles of their feet) with five non-retractile claws (so they they can’t retract them like cats do).

Paws and claws vary between bear species. These adaptions have evolved for different tasks such as climbing, digging and tearing.

Despite many of their characteristics being the same, there are differences between bear species, including teeth, head size, eye socket position and snout length. Observing different bear species’ skulls can show these differences more clearly. 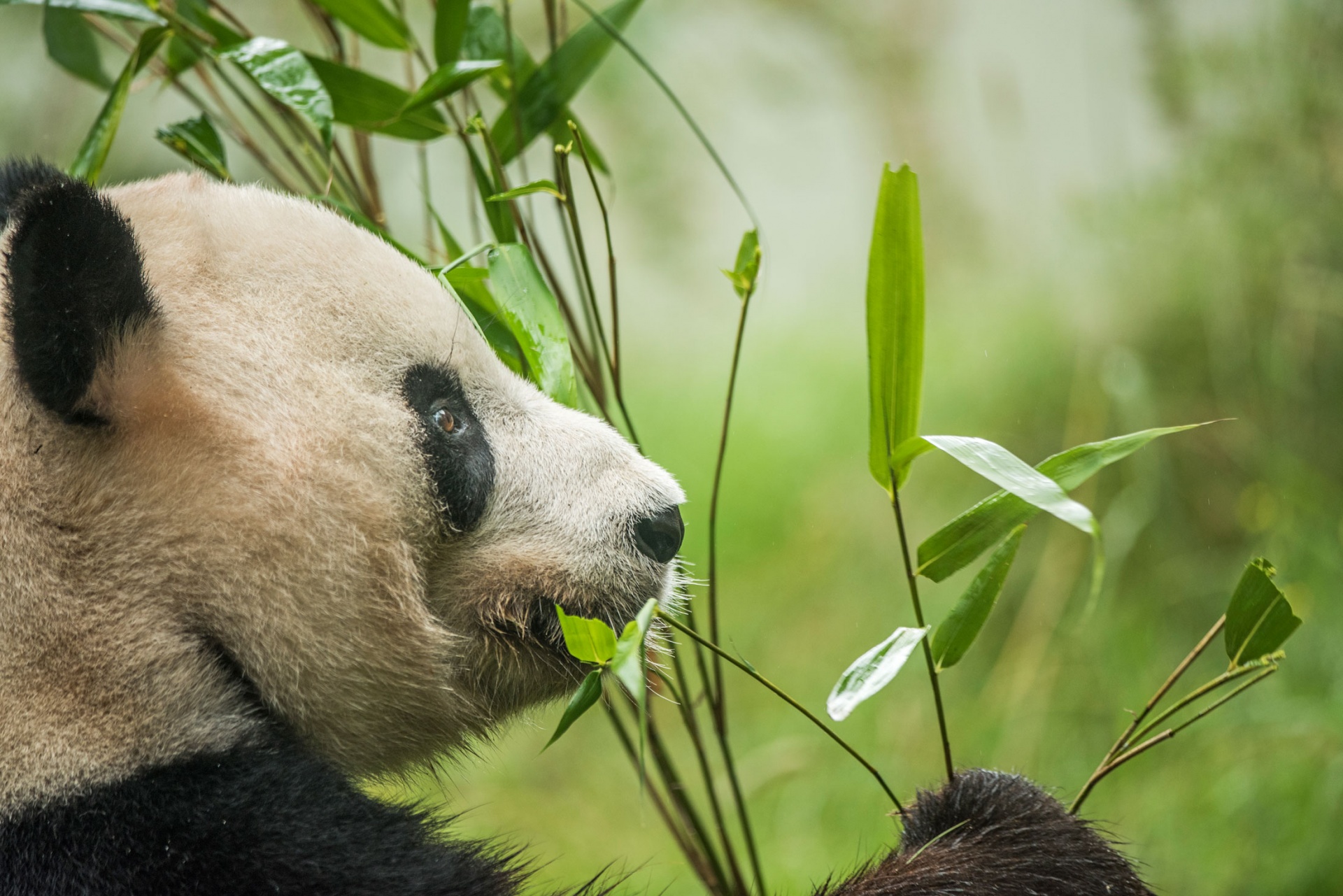 With the brown bear being a species that most people are familiar with, comparing other bears’ skulls to this one makes the differences more apparent.

The skull shape of a polar bear is very different to that of a brown bear. A polar bear has a flatter, lower skull, and its eye orbits are more elevated. This skull shape, along with denser limbs, is consistent with the polar bear’s semi-aquatic and carnivorous behaviours. 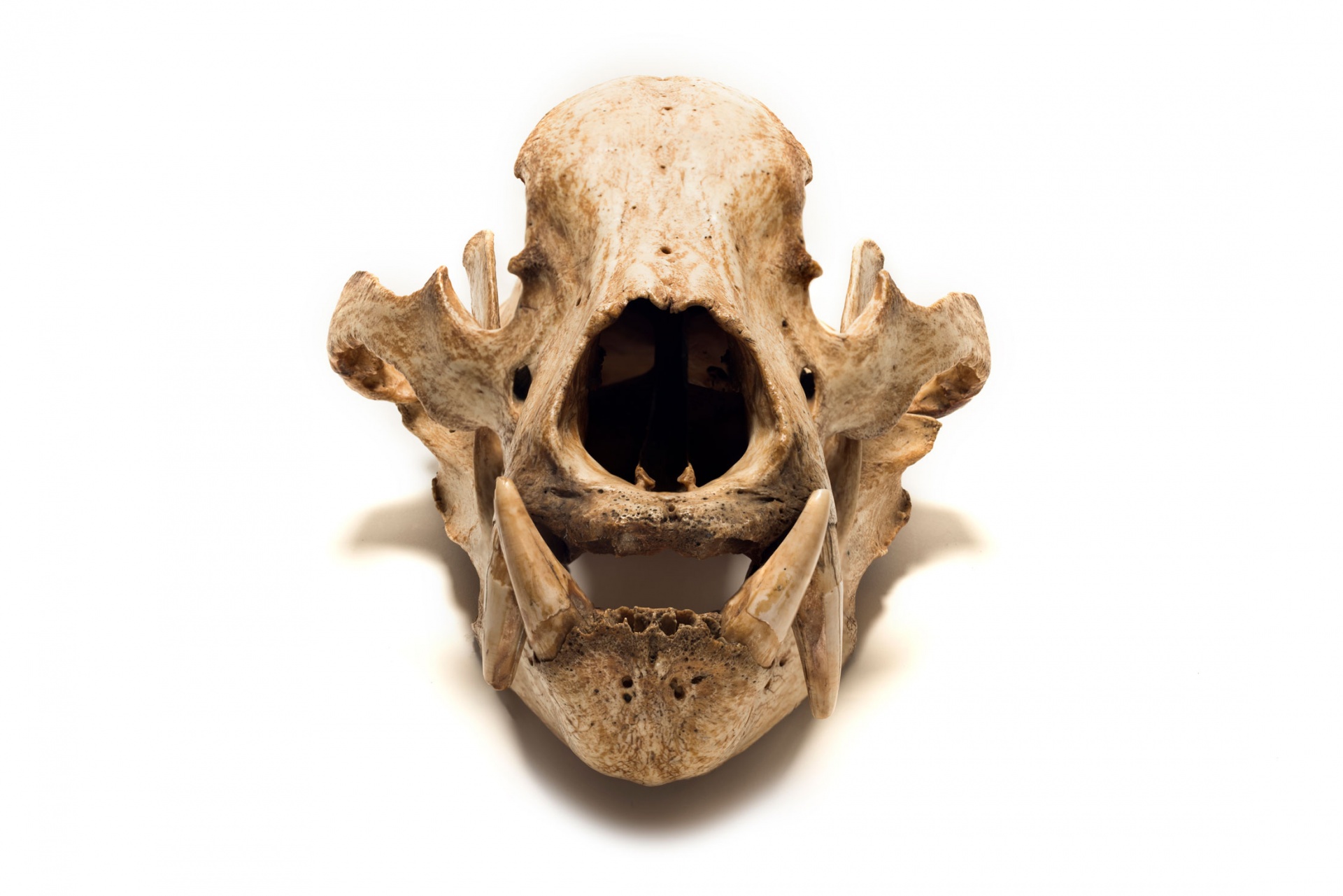 Polar bears have forty-two teeth and have developed blade like incisors to shear off pieces of flesh from their prey, with strong canines to grasp prey and tear tough hides. Since they swallow most of their food in large chunks rather than chewing it first, strong molars are not necessary, so these are much smaller than the ones belonging to the brown bear.

Although brown bears eat meat when it is available, they also consume a large amount of plant material in the summer, which requires a considerable amount of chewing before it can be swallowed. As such, brown bears do not have blade like incisors like the polar bear, but do have very strong molars. 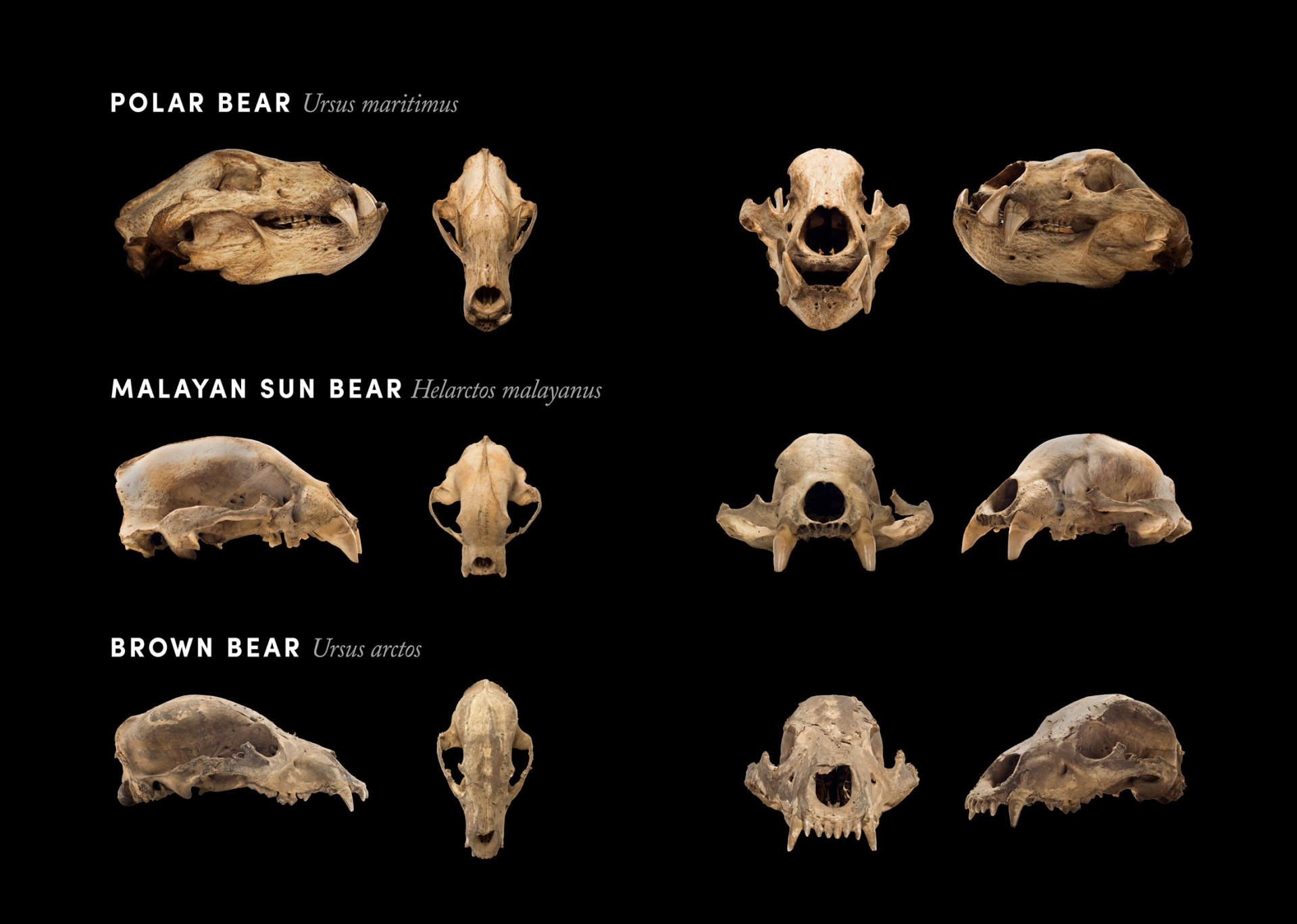 The Malayan sun bear’s skull differs from those of brown bears and polar bears. A sun bear’s diet consists of insects, larvae and honey. To get these, they have exceptionally large tongues. Despite this, their teeth are very big, especially the canines. The reason for this isn’t well understood, but could be related to the sun bear’s frequent opening of tropical hard wood trees in the pursuit of food. 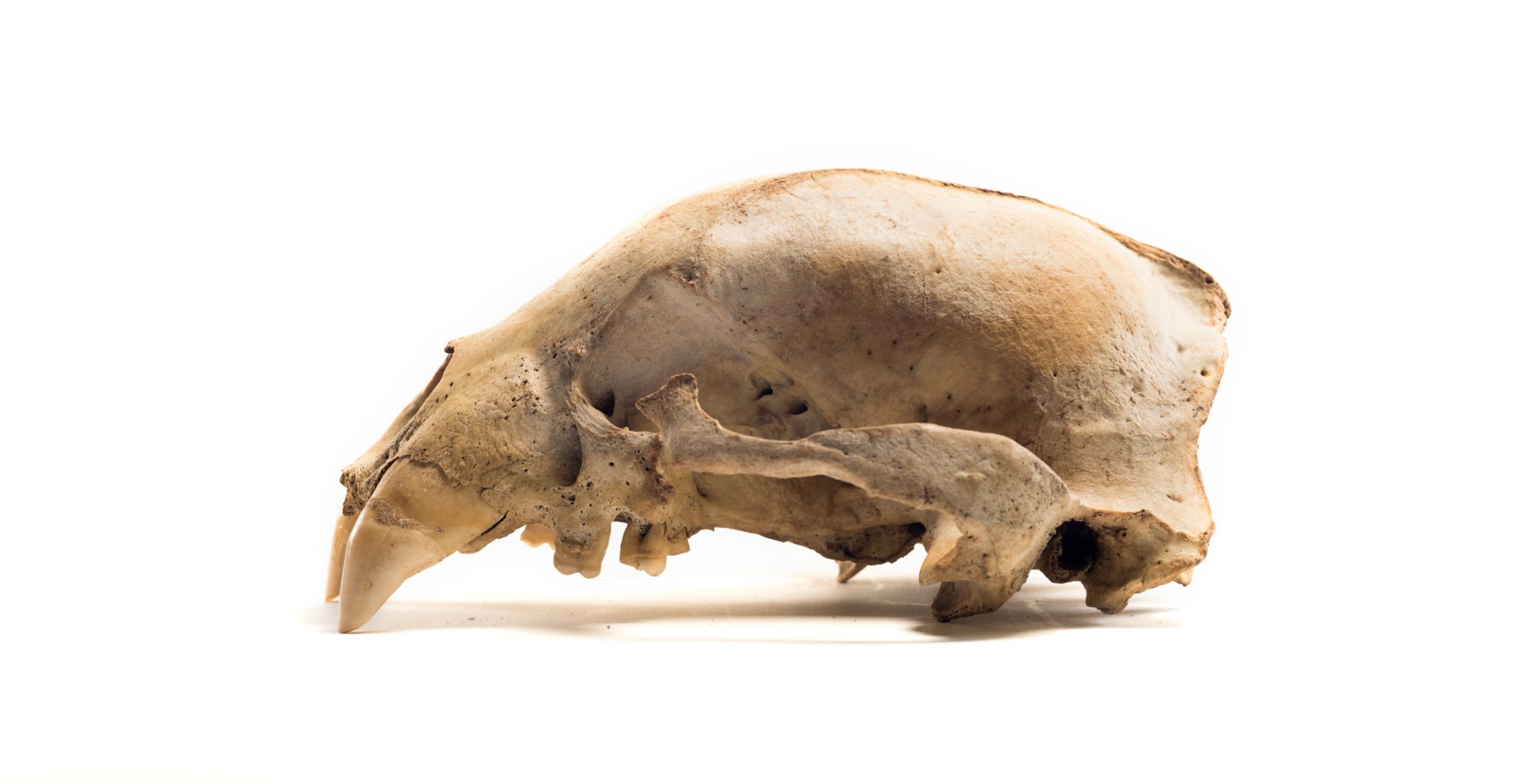 You might think that with such clever adaptations, bears are well-equipped to handle the challenges of our rapidly changing planet. However, according to the IUCN red list, six out of eight bear species are vulnerable.

So what’s going wrong for these mammals? The first and foremost issue is habitat loss and climate change, followed by relentless poaching. 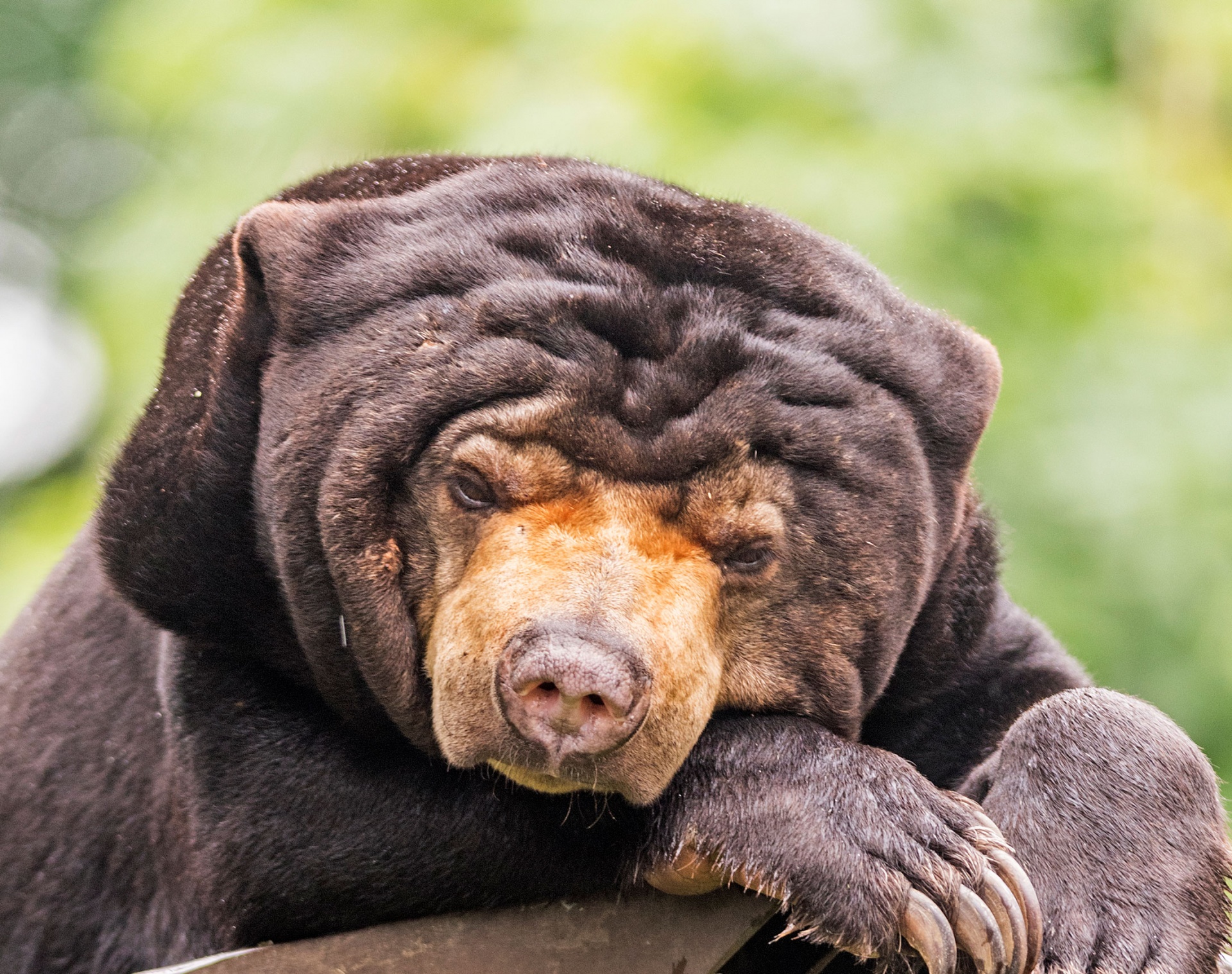 Paws for thought: a sun bear takes a moment to ponder in the midday sun. Image credit: Rosie Dutton

With bears spread across the globe, there isn’t a single answer that will result in saving all bear species. However, there are several conservation efforts being carried out to save the different species of bear.

One amazing project that has improved the number of European brown bears is that of the Libearty Bear Sanctuary in Romania. What started as a dream to rescue bears that were being cruelly exploited for entertainment has grown into a haven for over 100 bears, which now live among 70 hectares of oak and hazel forest in the Carpathian Mountains. 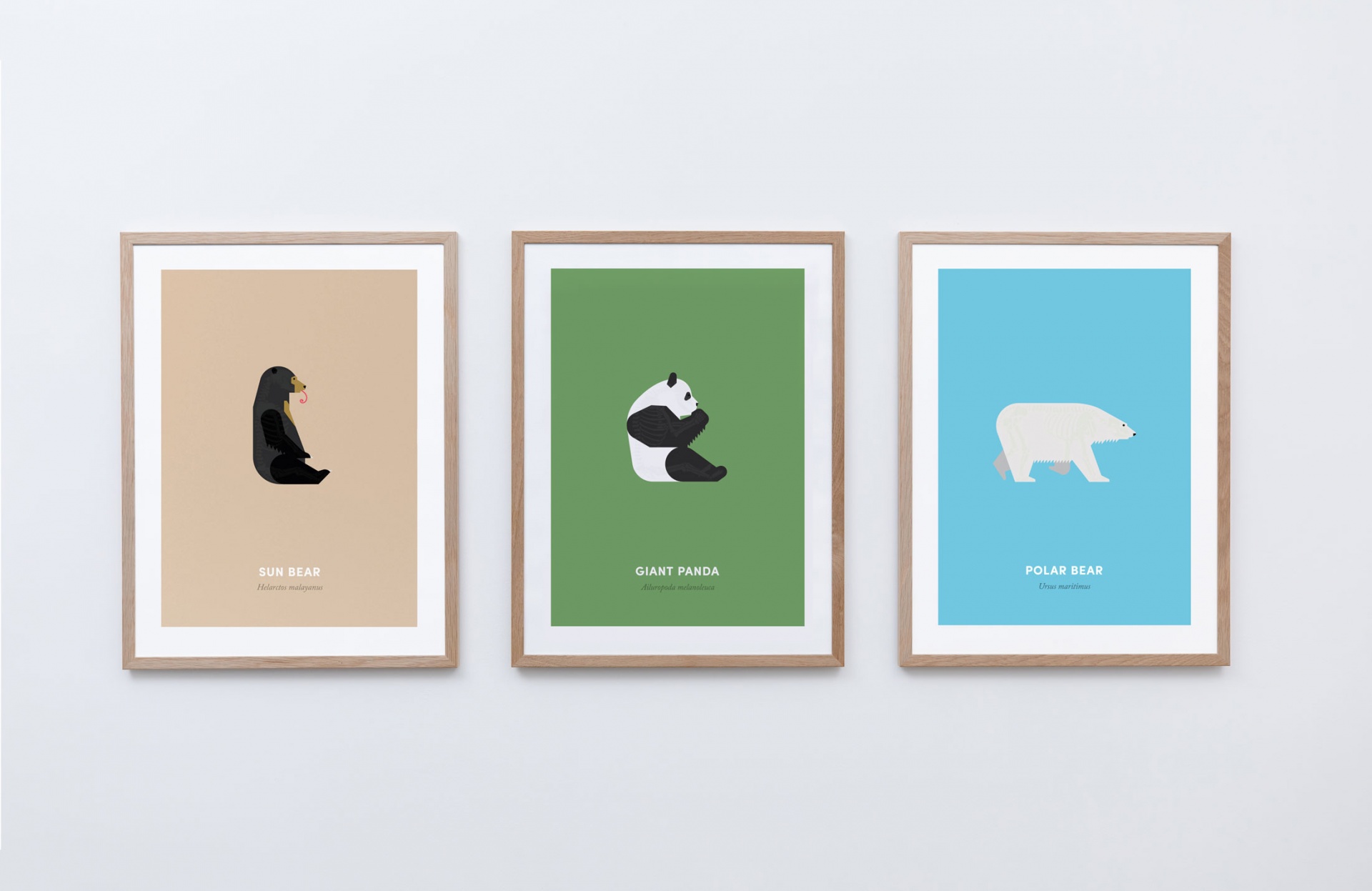 Under The Skin are protecting three of six vulnerable bear species; the Sun Bear, Giant Panda, and Polar Bear.

Similar projects exist to help other bear species; Under The Skin are proud to have partnered with the Bornean Sun Bear Conservation Centre and Pandas International, two charities that are doing amazing things for the conservation of bears. 20% of the proceeds from sales of all sun bear and giant panda prints are donated directly to these causes.

These organisations need as much support as they can get to continue helping bears in their natural habitats. Whether you help by donating to a bear charity, sharing a post on social media or buying one of our #PrintsThatProtect, we believe everyone can do something to support the protection of wild animals. 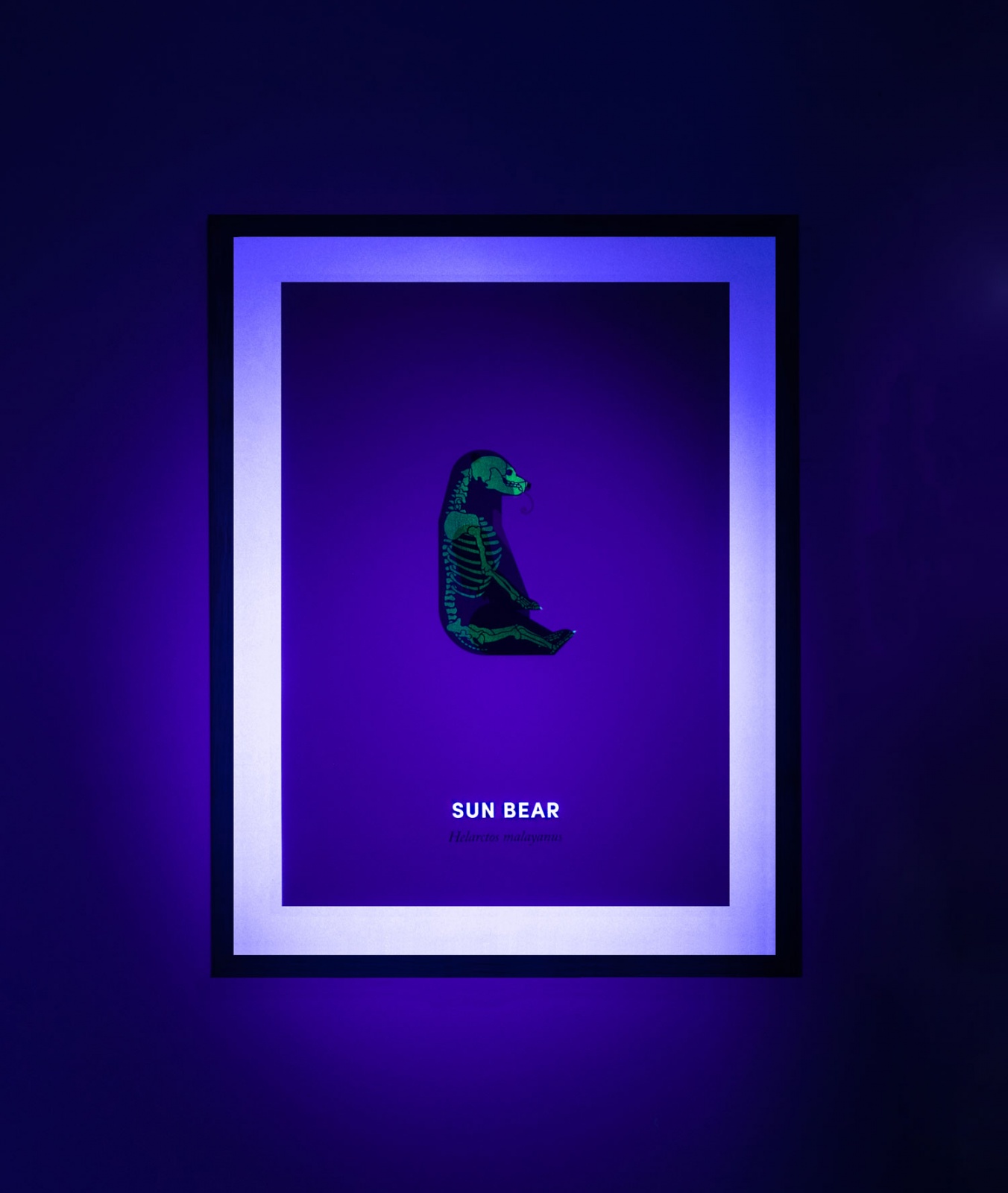 Under UV light the skeleton is revealed - all that remains if the bear species falls into the darkness of extinction. 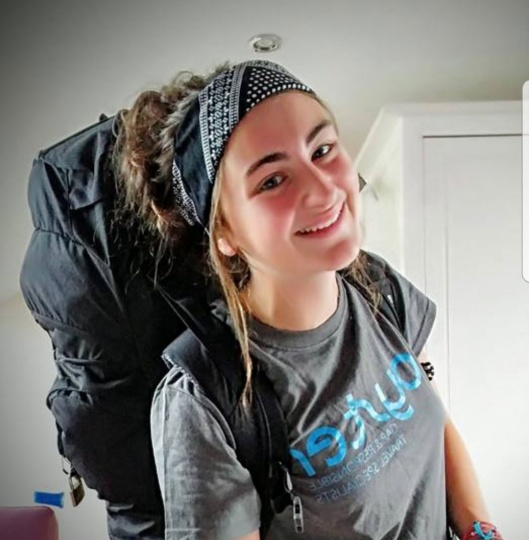 Rosie is a wildlife photographer and filmmaker based in Leeds. As well as capturing the natural world on camera, she works for the RSPB to help protect wild animals and the environment.