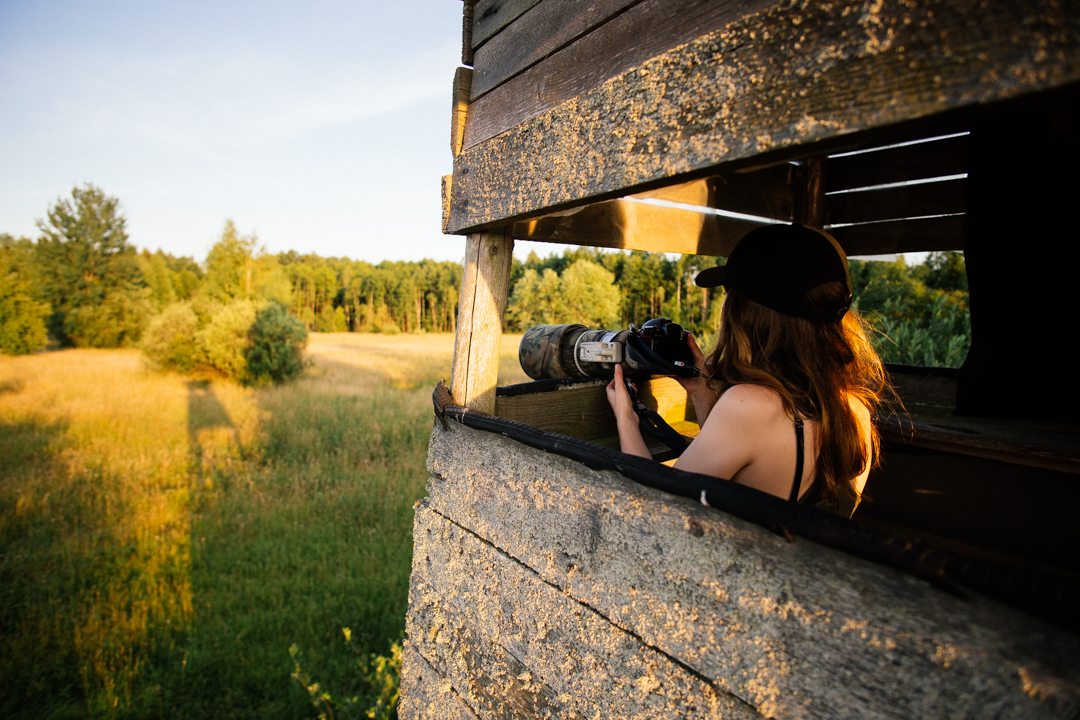 Back to Journal
Posted in Interviews

Behind the lens with Stephanie Foote

We love nothing more than coming across the work of talented photographers who have dedicated their time and craft to celebrating the natural world. And Stephanie Foote is no exception.

Stephanie is an emerging wildlife photographer on a mission; to bridge the gap between the science and arts, using her camera as a tool to bring people closer to nature and highlight the threats to wildlife and habitats around the world. She has recently worked with Rangers Without Borders, a National Geographic sponsored multidisciplinary project in partnership with WWF, and is a contributing photographer for The Canid Project. She now works as a visual content creator for the World Conservation Monitoring Centre. We managed to catch up with Stephanie and talk about tracking foxes, hedgehog hardships and where her journey as a wildlife photographer began. 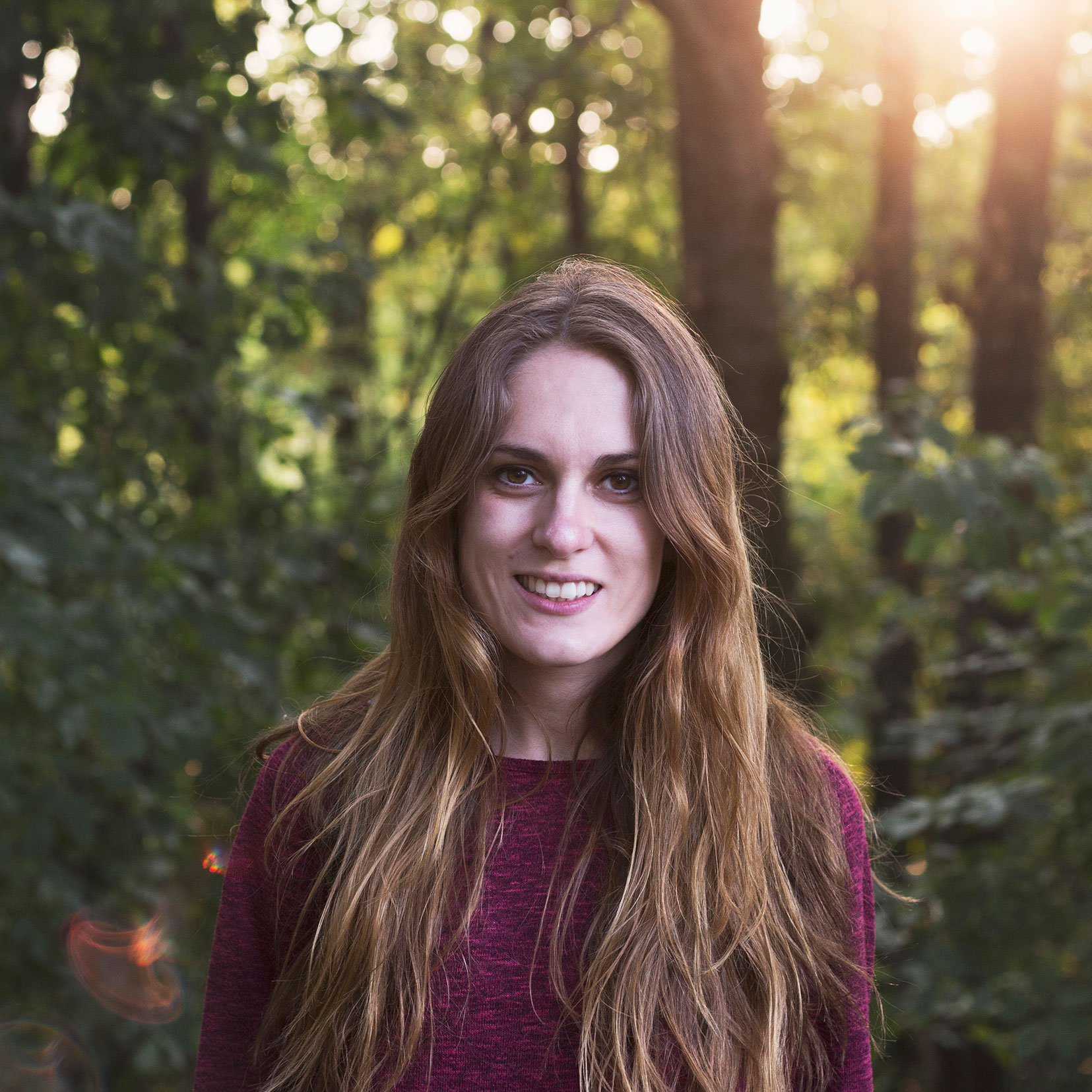 Under the Skin: Where did it all begin, when were you first introduced to photography?

Stephanie Foote: When I was a child my parents occasionally bought me disposable film cameras, which I took along on family holidays and on school trips. For me photography was like an escape from everything else; when I am taking photographs it is almost like time freezes, I am completely focused on the scene around me, the sounds, the light and the noise. At one point I transformed my sister’s bathroom into a makeshift darkroom and spent time creating sun prints in the garden of spring flowers and leaves using photographic chemicals lent to me by my photography teacher at college. There is something kind of magical about the photographic process and although I am certainly not the most technical photographer on the planet, I find capturing images fascinating! I think to live a happy and fulfilling life everyone needs to feel like they have a purpose and I found mine in photography. 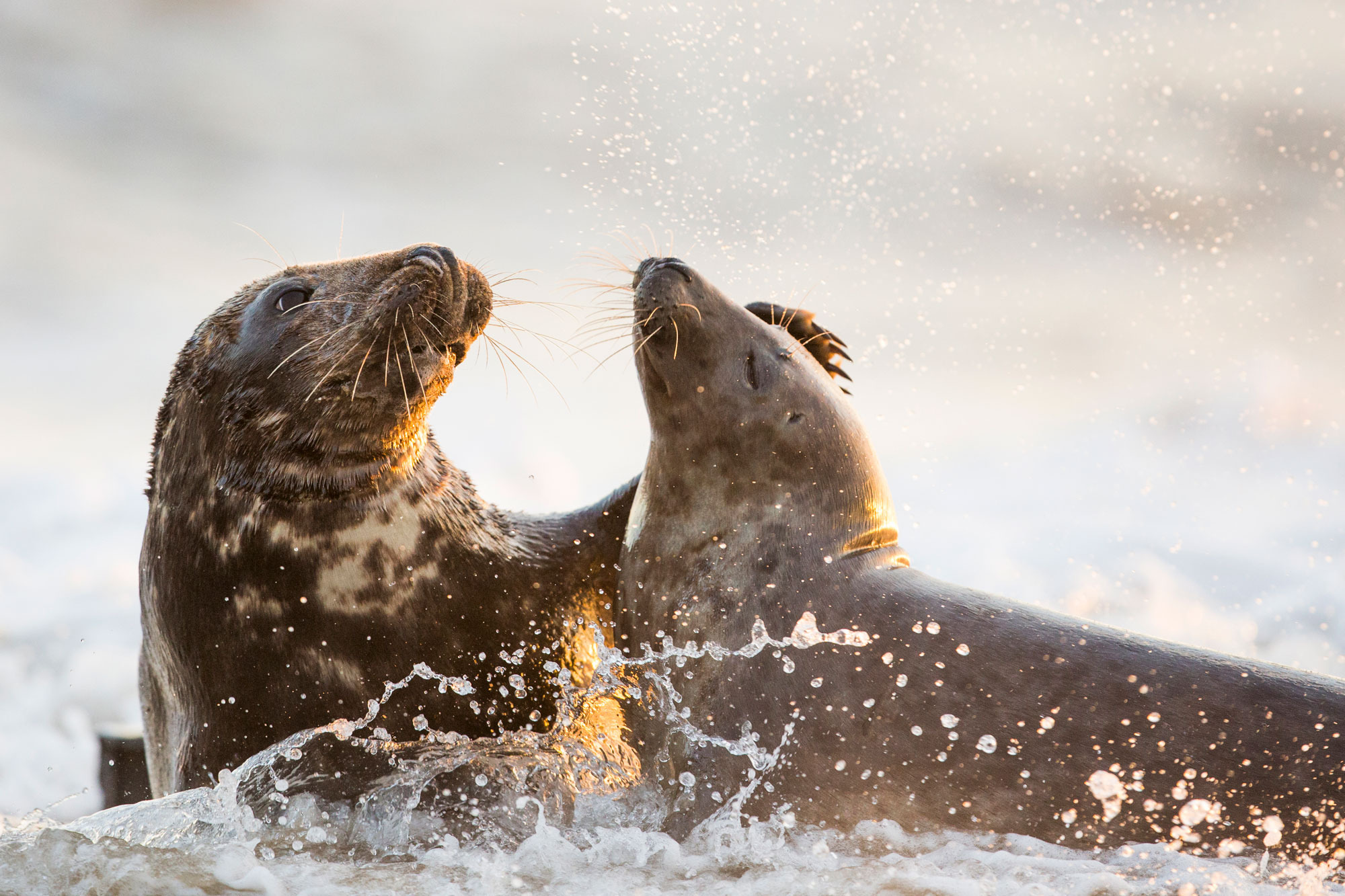 What led you to concentrate on wildlife in your camera work?

As a child, natural history was a subject that captured my imagination like no other and I spent countless hours reading nature books and watching wildlife. I cannot remember a time when I have not been filled with a sense of wonder and fascination for the living things we share out planet with. Today, the favourite part of my job is having the opportunity to be out in the wild. It is a true privilege when a wild animal feels at ease in my presence and grants me the opportunity to observe a fleeting moment or interesting behaviour. I was naturally drawn to concentrate on wildlife in my camera work, but it was during college when I became totally committed to wildlife and conservation photography. I was disheartened to see the negative impacts humans have on the environment and I aspired to use my creative work to support scientists, conservationists and organizations to conserve biodiversity and ultimately protect nature. 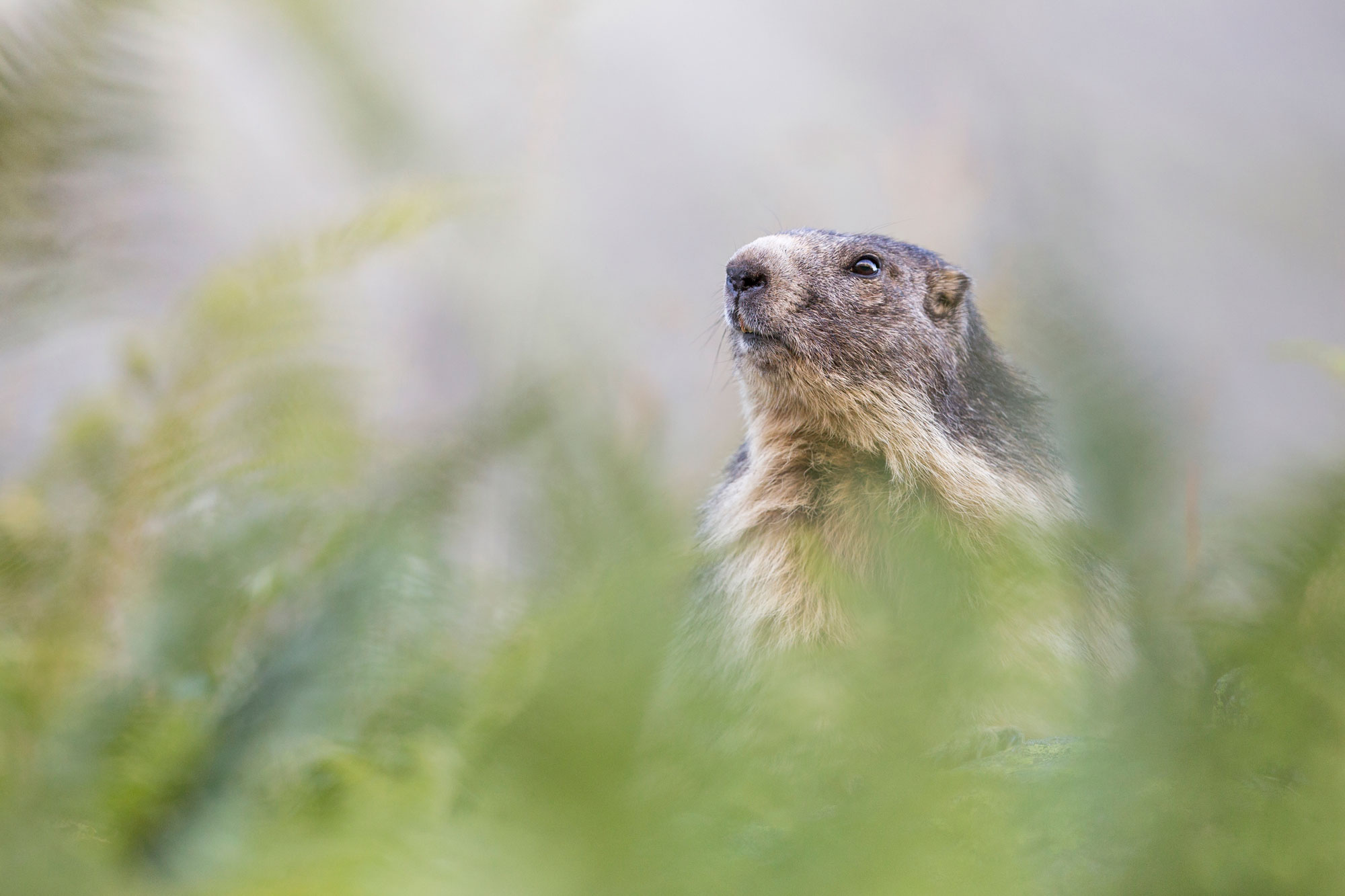 An Alpine Marmot on the lookout for predators, in the Aiguilles Rouges, France.

Where do you find inspiration? Is there someone you look up to, a role model?

I am always thinking about my next photographs and my biggest inspiration is nature itself. I try to conjure up potential ideas using my imagination. Whether it is tiny water droplets glistening on a mossy wall or an urban fox crossing my path, there are stories everywhere: we just have to be brave enough to find them. In terms of role models, I have been extremely fortunate to receive advice from several industry professionals who I look up to. This year I have received so much kind advice, especially from Amy Shutt, Will Nicholls and Sam Stewart. I also recently attended a talk by Ami Vitale and her work was an inspiration. After spending time working as a war photographer, she began to make the transition into nature photography. She often focuses on hopeful stories and the wonderful stories that unite international communities rather than spread division. I think this approach is really fantastic and her photographs are composed as beautifully as classic paintings. 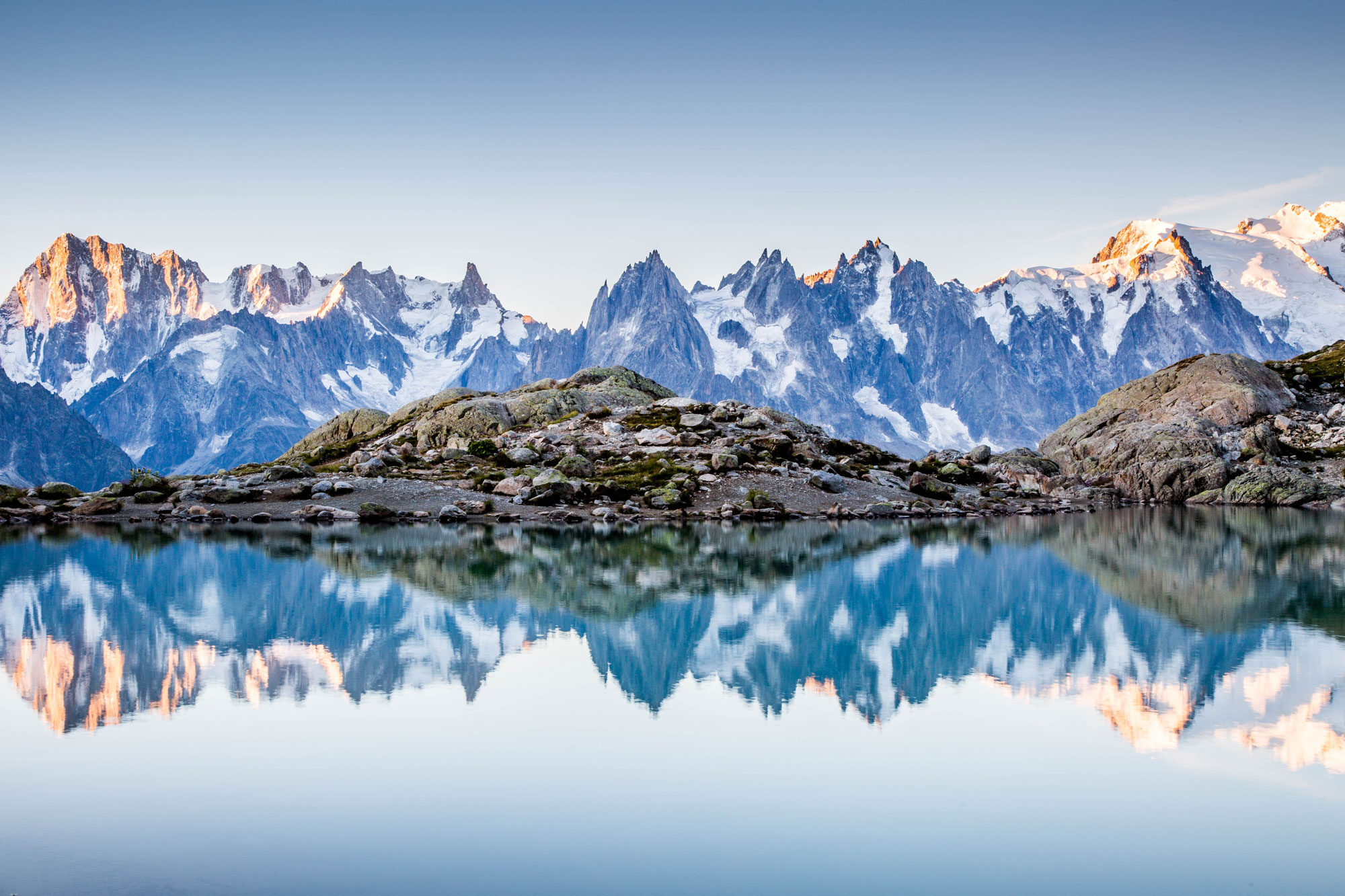 Sunrise at Lac Blanc, Chamonix in the summer months.

What are the main challenges you face as a wildlife photographer?

It is by no means easy to make a living as a wildlife photojournalist. The biggest challenge for me has been maintaining a steady income and finding paying clients. You have got to be self-motivated, confident in your abilities and have excellent time management skills. You also have to be patient. During my work for The Canid Project, I have spent many weeks wandering around parks and streets in London tracking foxes. Sometimes you can walk for 7 hours and not see much, other times you get lucky, spotting several foxes at a time! It takes even longer when you are working with elusive animals in rural areas, where they are not habituated to humans living in close proximity. It requires a lot of perseverance, but I cannot imagine a more fulfilling career. 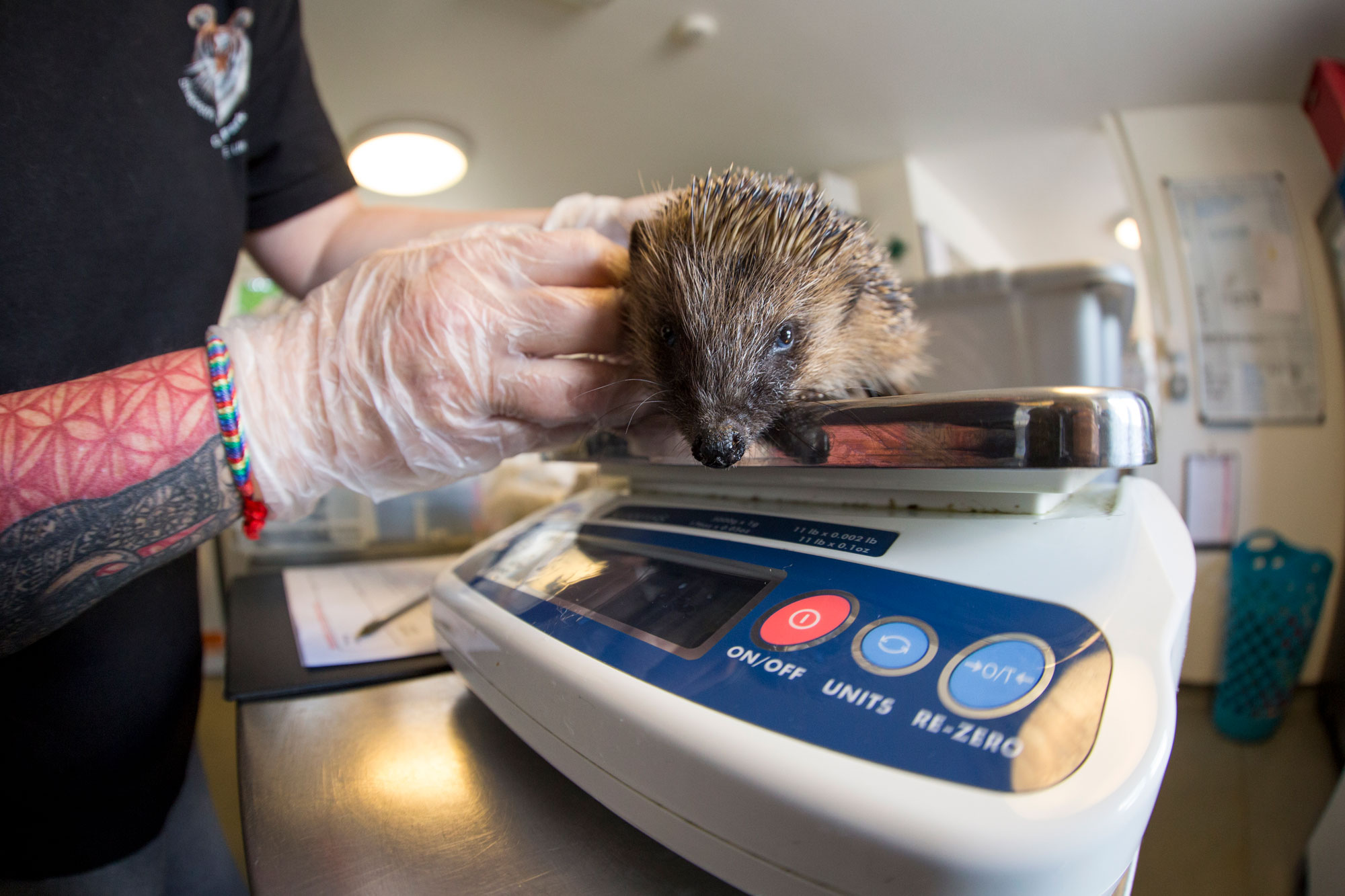 A hedgehog getting its weight checked at Shepreth Hedgehog Hospital. Patients must be carefully monitored to ensure a swift recovery.

How can camera work be used to help endangered and vulnerable animals?

I care deeply about the wildlife I photograph and I often find the best way to tell a story well is to place myself within it. For an ongoing documentary in collaboration with The Shepreth Wildlife Conservation Charity, I spend many weekends assisting their work with hedgehog rescue. By spending my time working alongside their dedicated team, I am able to gain a greater insight into the hardships hedgehogs face on a daily basis. My documentary project has had a direct impact on hedgehog conservation; a short video I produced led to forty people applying to be part of a programme for recovered hedgehogs to be released into their gardens. I also use the photographs I have taken to raise awareness around my village and I hope this has led to more hedgehog corridors and an increased understanding of actions that can help this species. Photographs have a much larger impact than words alone. Photography connects us to our world. 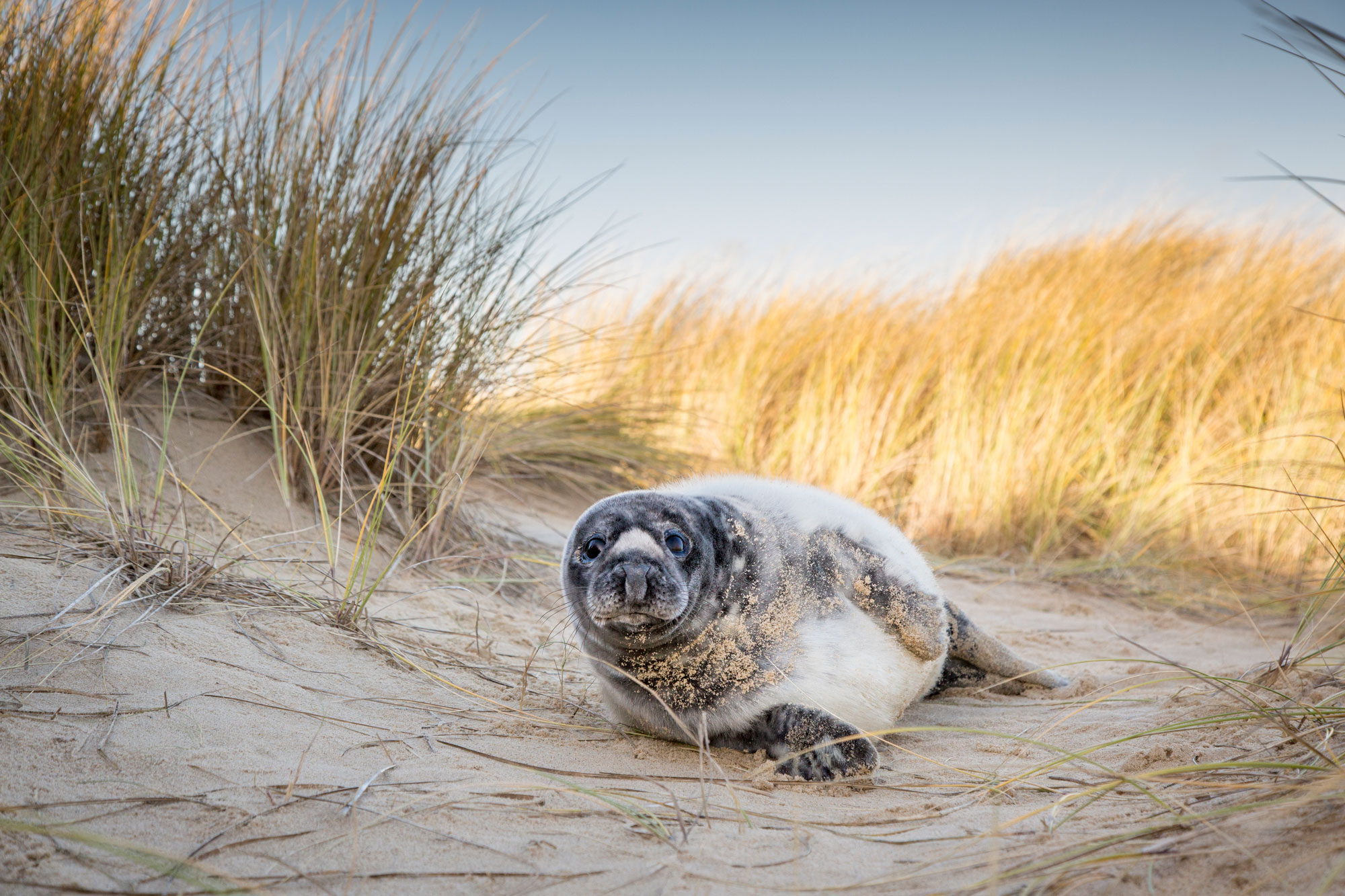 Grey Seal pup. Seal pups are born with white fur that is not waterproof, this changes once they reach a certain age and they gradually gain their waterproof coat.

What is your favourite image you have taken to date? Can you explain the background story to it?

My photograph of a young red fox in a graveyard, emerging from behind some colourful flowers. This photograph may not be perfect in terms of composition and it does not feature an exotic location, but it is my favourite image I have taken because of the memories attached to it. When I was younger, I spent time observing foxes in my grandparents’ urban garden and to me they were like something straight out of the fairytale books I read. I must have been a toddler, but I remember catching glimpses as one disappeared into the overgrown air raid shelter that was derelict at the end of the garden. There was endless amusement when a fox once stole my aunt’s gardening gloves and foxes stuck with me as a favourite ever since. Until January 2018, I had rarely photographed wild foxes. That changed when Amy Shutt invited me to become a contributor for The Canid Project. With renewed enthusiasm, I set about researching as much as I could about foxes in the UK.

Photographs have a much larger impact than words alone. Photography connects us to our world.

I read natural history books, watched documentaries and contacted others for help. I had friends who would see urban foxes and I would ask them to let me know where they saw them. Eventually I decided to focus on a specific location and for many months I would visit that location at least once a week. I often photographed this particular fox, which I learnt was a one-year-old vixen, who had stuck around in her mother’s territory, where she was born. Sub-adult foxes are often the most inquisitive and I feel my photograph captures this vixens curiosity perfectly! Foxes in urban areas are much more approachable as many local people find joy in providing food for them but I have learnt this can result in human wildlife conflict due to the polarized opinions regarding foxes. 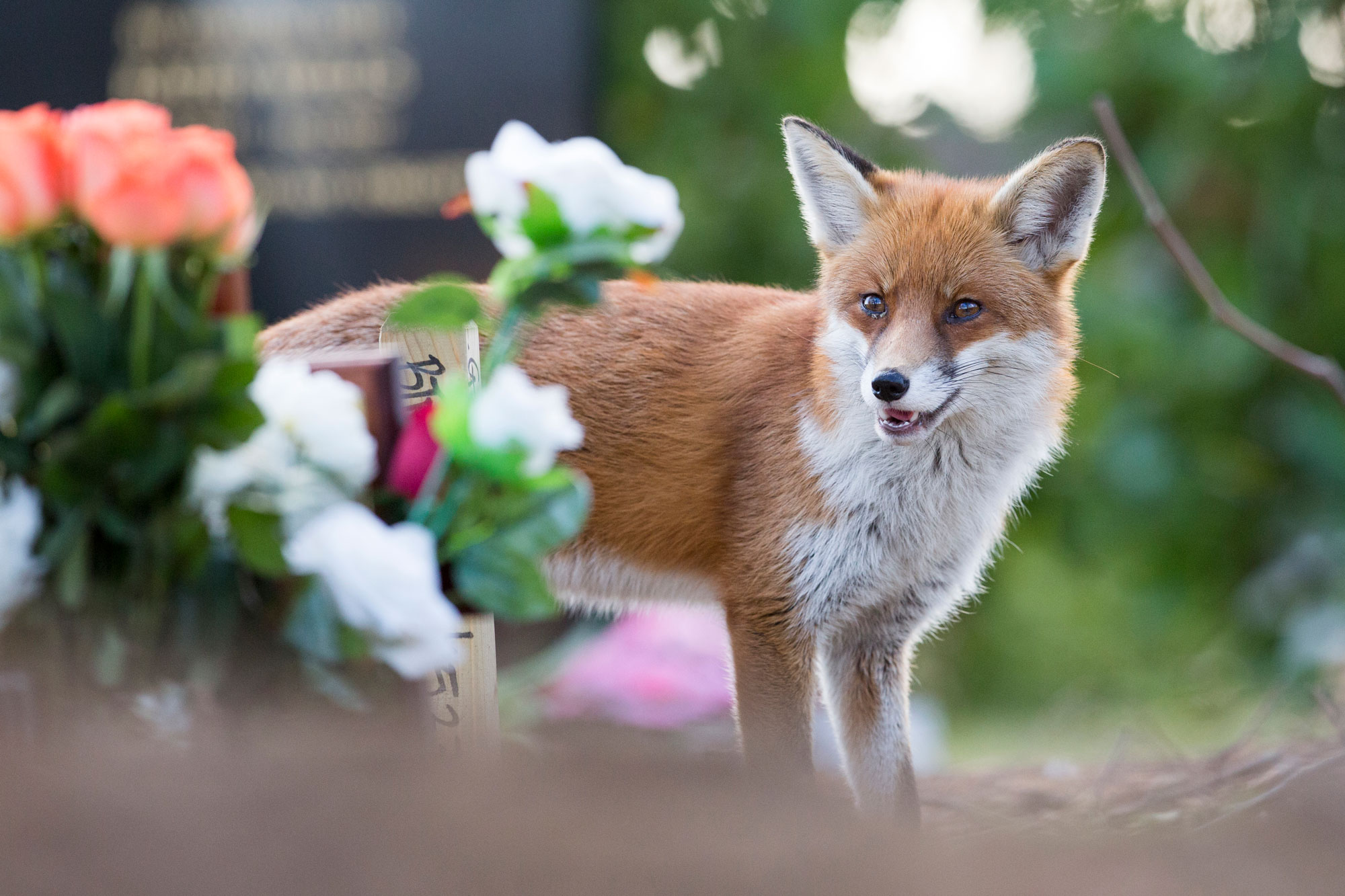 A curious red fox in a graveyard. Sub-adult foxes are often the most inquisitive.

What animal would you most like to photograph that you haven’t already?

I would love to photograph more of the world’s canid species. Wolves and foxes are often portrayed negatively in fictional stories across the globe and I would like to do more to use communication to mitigate human-wildlife conflict. At the moment, I am hoping to save up to go on an expedition to photograph Arctic foxes and create a photo story about them to complement my stories about red foxes close to home. 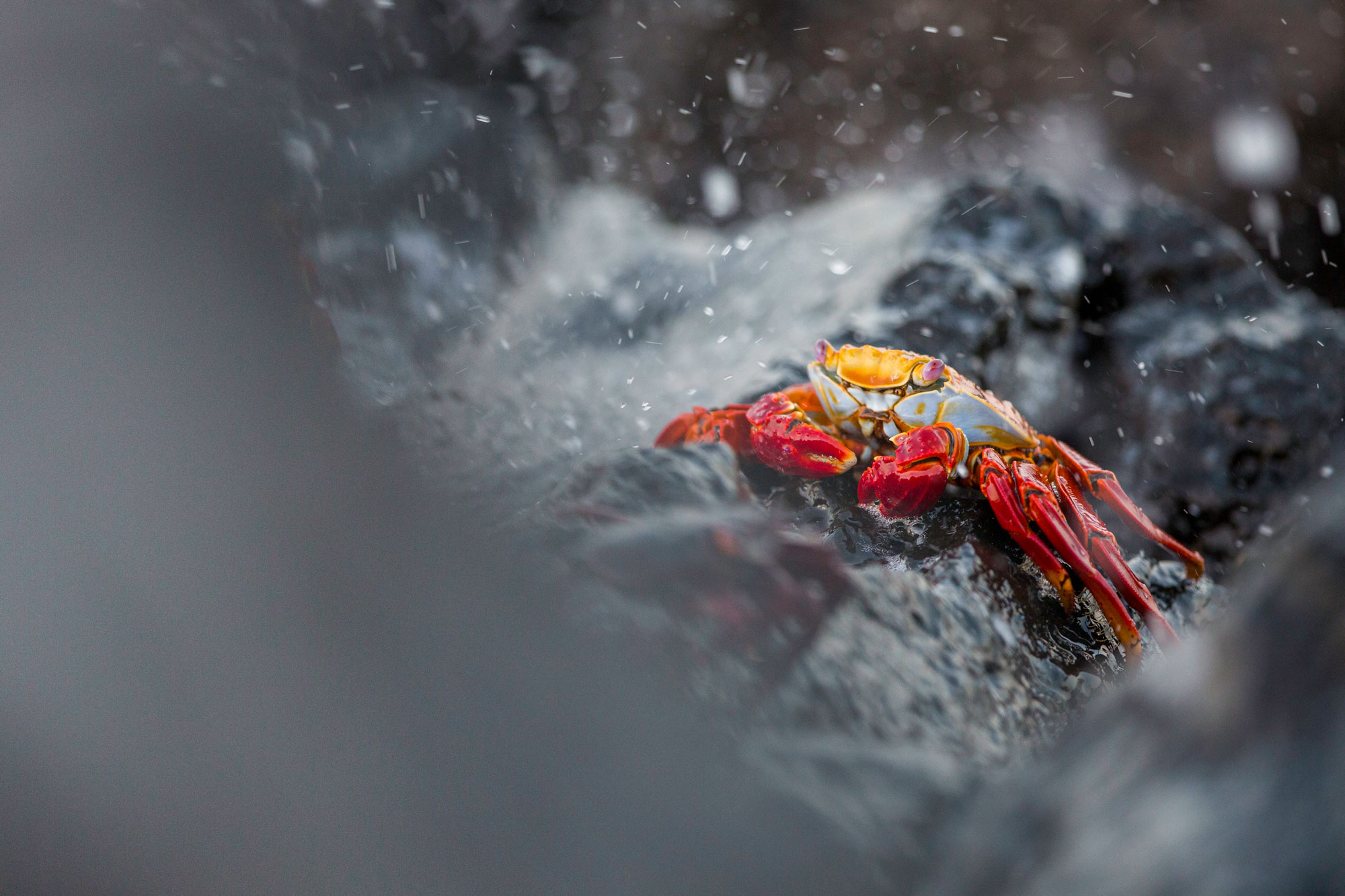 A Sally Lightfoot Crab. This colourful scavenger's common name derives from their natural agility jumping between rocks and moving swiftly to avoid predators.

What advice would you give to aspiring photographers and people looking to get involved in nature conservation?

When used effectively, social media can be an amazing tool for aspiring photographers. Use social media to connect with others who share your interests; this can be a brilliant way to learn new skills and find inspiration. Attend talks and networking events; by carefully searching keywords on Eventbrite you can sometimes find free nature-related events and these are a good opportunity to approach and talk to people.

Collaborate with scientists and researchers. I think wonderful things can happen when a group of people, each with a different skill set and background, work together.

Collaborate with scientists and researchers. I think wonderful things can happen when a group of people, each with a different skill set and background, work together. Even if you rely on a day job that is totally unrelated, it does not matter. It is only more recently that I have been offered my dream opportunity to work in the conservation media sector and it took time to get there. If you want to be involved in conservation, spend any spare moment you can volunteering to help wildlife and during this time you will make a tangible difference and be able to tell stories about hands-on efforts to protect nature. If you see a job you want, but you are not sure you have the right experience, apply anyway. Finally, remember you can make a difference on your local patch: try making your garden or balcony, if you have one, wildlife friendly. Flowers and native plant species benefit all kinds of creatures!

To learn more about Stephanie’s work or to follow her online, please visit the links below: