Extinction Rebellion: Wales Rising Up - Under the Skin of Endangered Animals

Back to Journal
Posted in Activism

‘We will gather at the City Hall of Cardiff for 11am on Saturday 10th March.’

The directions have been given. The plan has been made. Extinction Rebellion, an uprising of new-age environmental activists, are spreading a movement throughout cities worldwide, and the Welsh capital is next to join the movement.

Crowds flock towards the sound of beating drums, where a colourful crowd gathers in the sun. Young and old are dressed as an array of animals – colourful birds, hairy gorillas, wolves, grizzly bears and species of all kind. Bees seem to have caught the hearts and imagination of both children and grown-ups, and we spot flickers of black-and-yellow winged costumes throughout the swarming crowds (the adults admittedly seem less likely to take flight with their ungainly body-to-wing ratios). 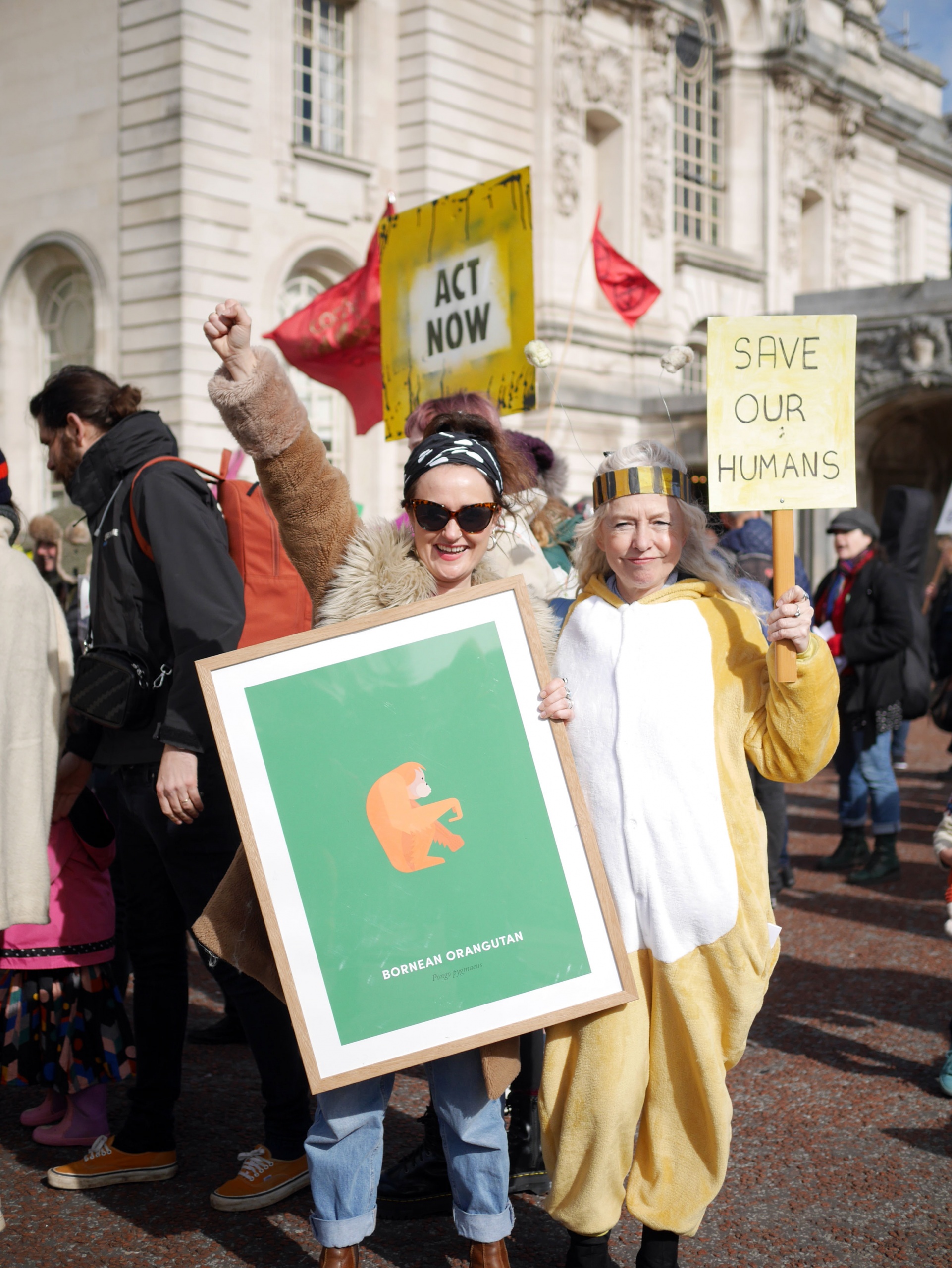 An array of hand-painted signs are held up by passionate protesters. ‘Extinction is forever.’ ‘Stop the melt.’ ‘Act now.’ ‘It’s capitalism vs. the planet.’ The messages are heavy, yet the event is peaceful. It feels more like a carnival than protest.

Today people have travelled from all over Wales to share their voice through non-violent protest. But today’s march isn’t simply about voicing warnings about the consequences of the unfolding climate emergency. It’s about positive action. And that’s why we’re here. 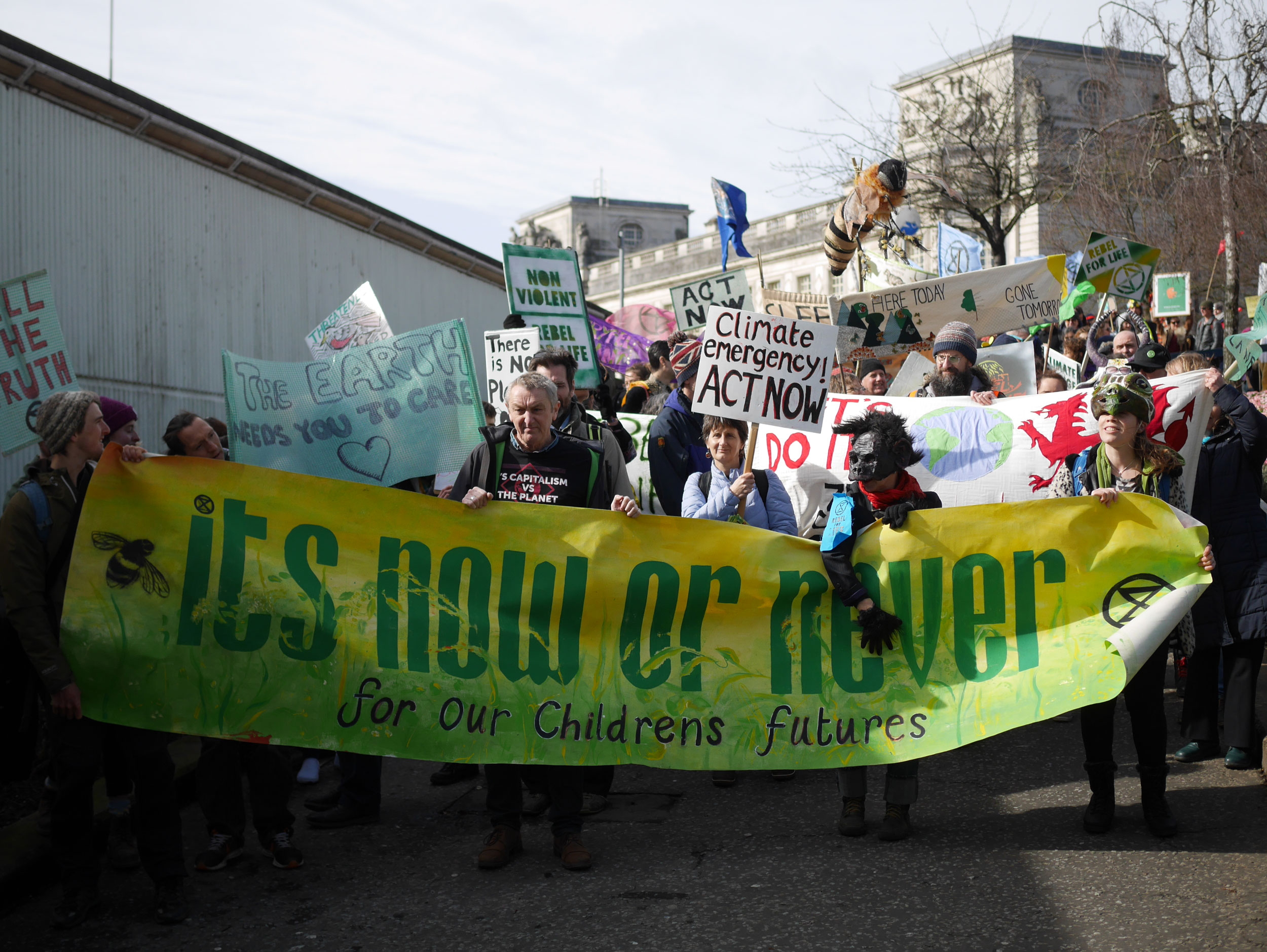 Who are Extinction Rebellion?

Extinction Rebellion began as a non-violent reaction to the paralysis of political leaders in the wake of today’s environmental crisis.

The campaign rose to prominence when thousands swarmed to London, blocking five bridges as a form of ‘respectful disruption’. The event was an attempt to change the debate around climate breakdown and to warn those in power that the present course of action will lead to disaster. 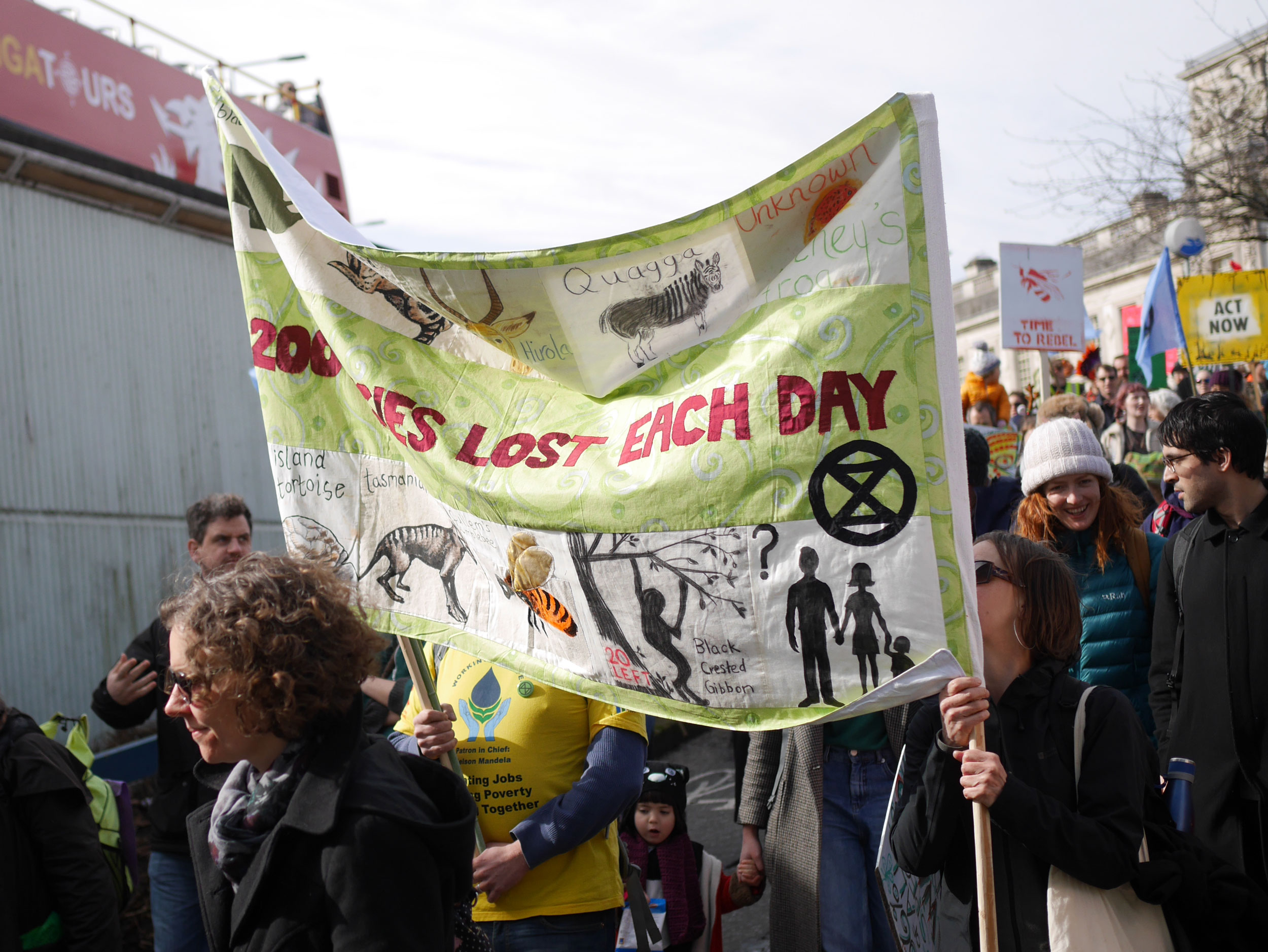 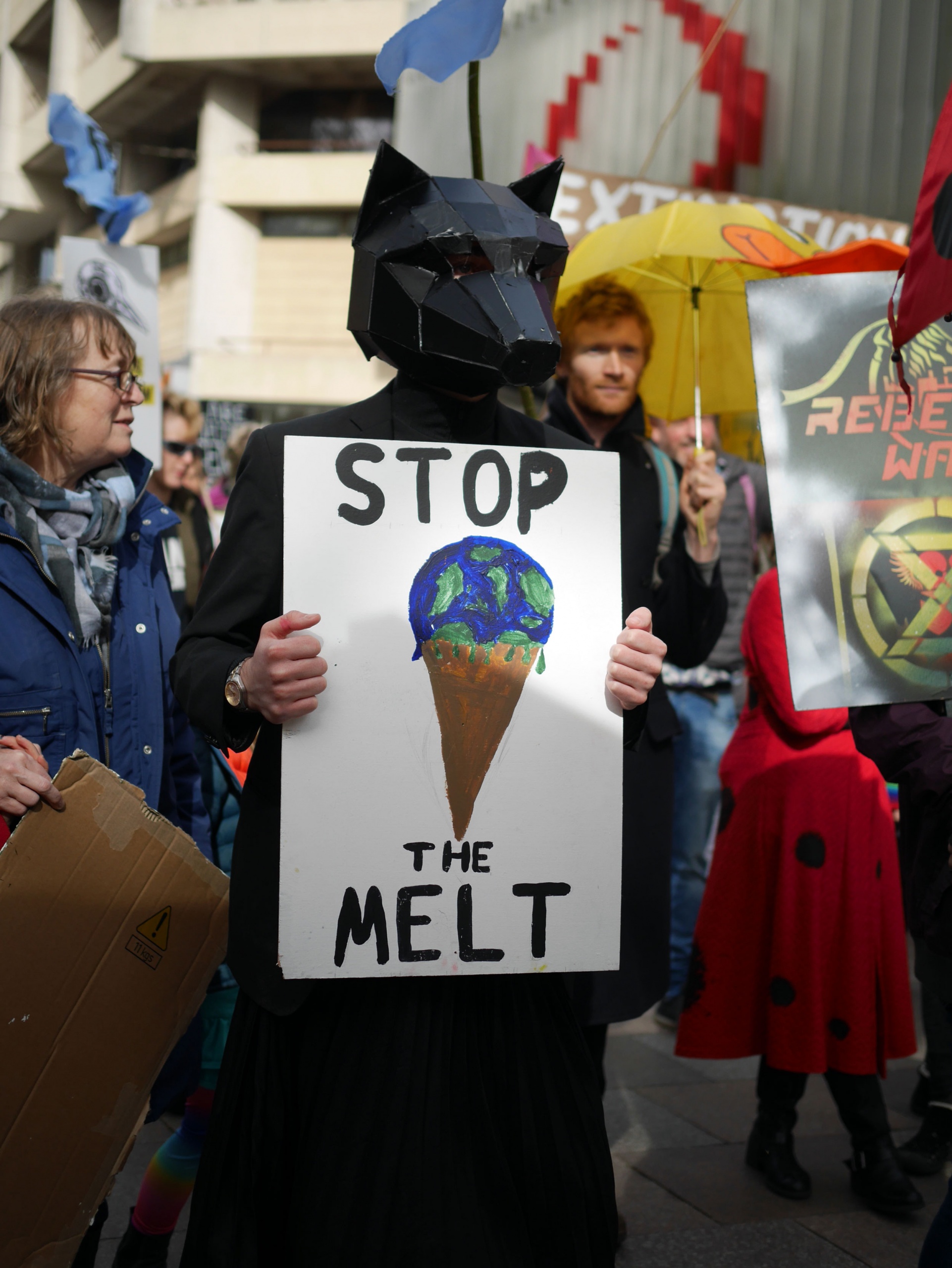 This form of direct action has struck a chord worldwide. In the months since their first protest, Extinction Rebellion have expanded to more than 35 countries. There is a lot of energy in this new movement, and it’s turning global. The organisers are now planning to change their structure to accommodate for up to 2 million people.

The three declarations from Extinction Rebellion are clear:

1. The Government must tell the truth about the climate and wider ecological emergency, reverse inconsistent policies and work alongside the media to communicate with citizens.

2. The Government must enact legally binding policy measures to reduce carbon emissions to net zero by 2025 and to reduce consumption levels.

3. A national Citizen’s Assembly to oversee the changes, as part of creating a democracy fit for purpose. 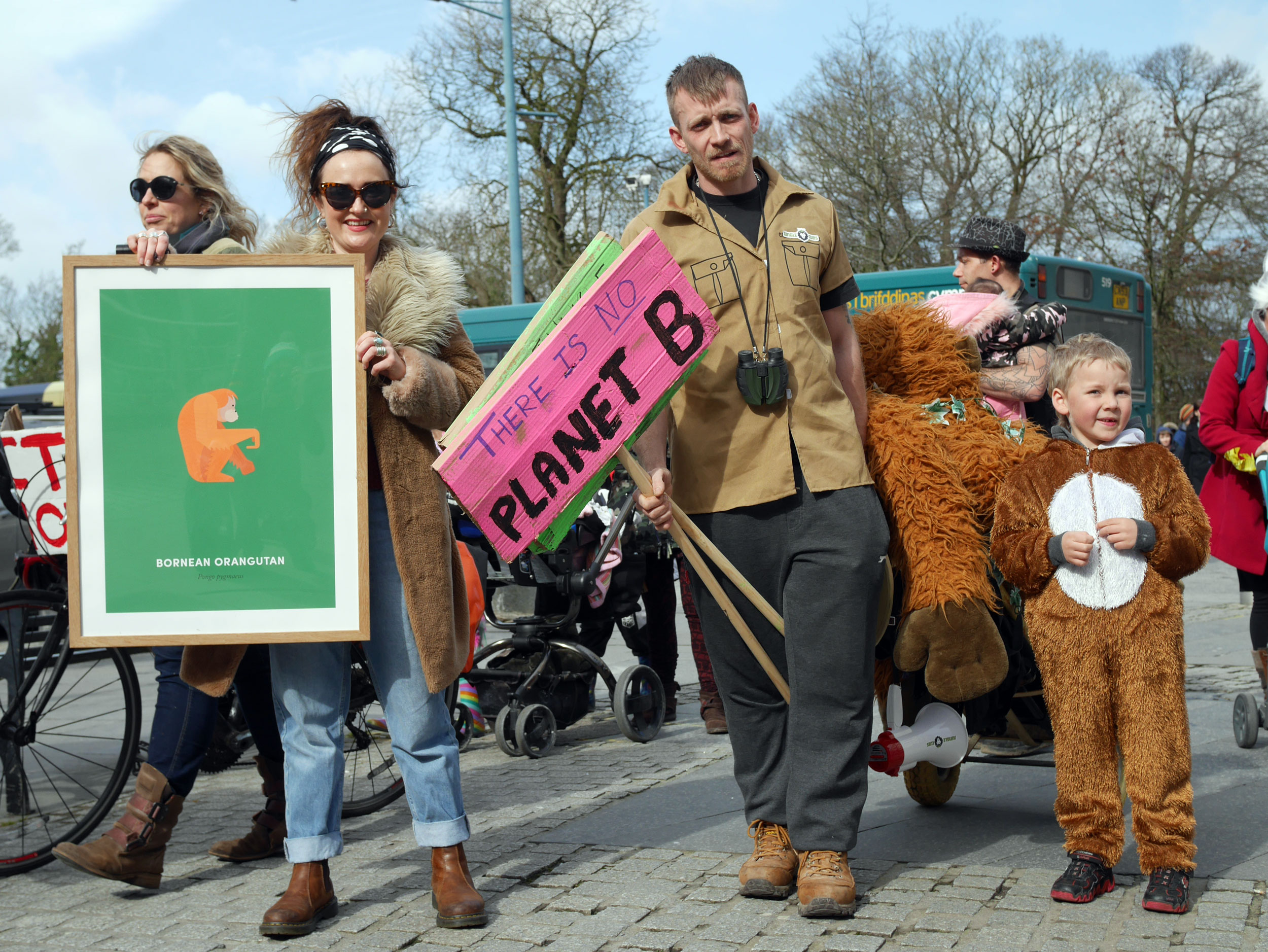 Many see protests as a waste of time, arguing that the spirit and energy could be better channeled towards positive action such as planting trees or cleaning beaches. In many cases we agree. But today the protest falls directly in line with George Monbiot’s two rules of effective campaigning: “identify exactly what you are trying to achieve, and ensure that every step you take towards that objective leads to the next step.”

In a nutshell, Extinction Rebellion is calling on the government to reduce carbon emissions to zero by 2025 and establish a Citizens’ Assembly to devise an emergency plan of action similar to that seen during the second world war. 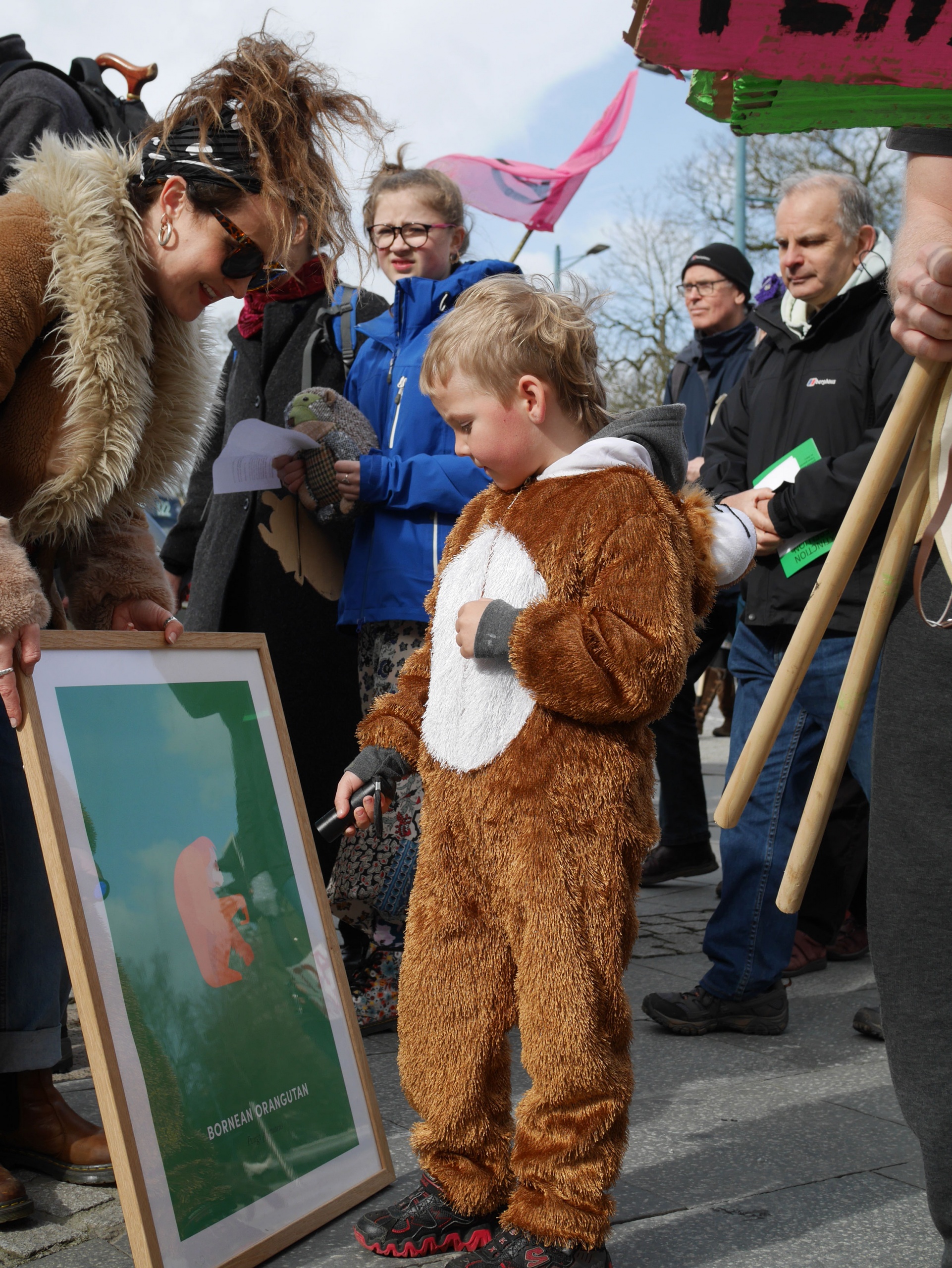 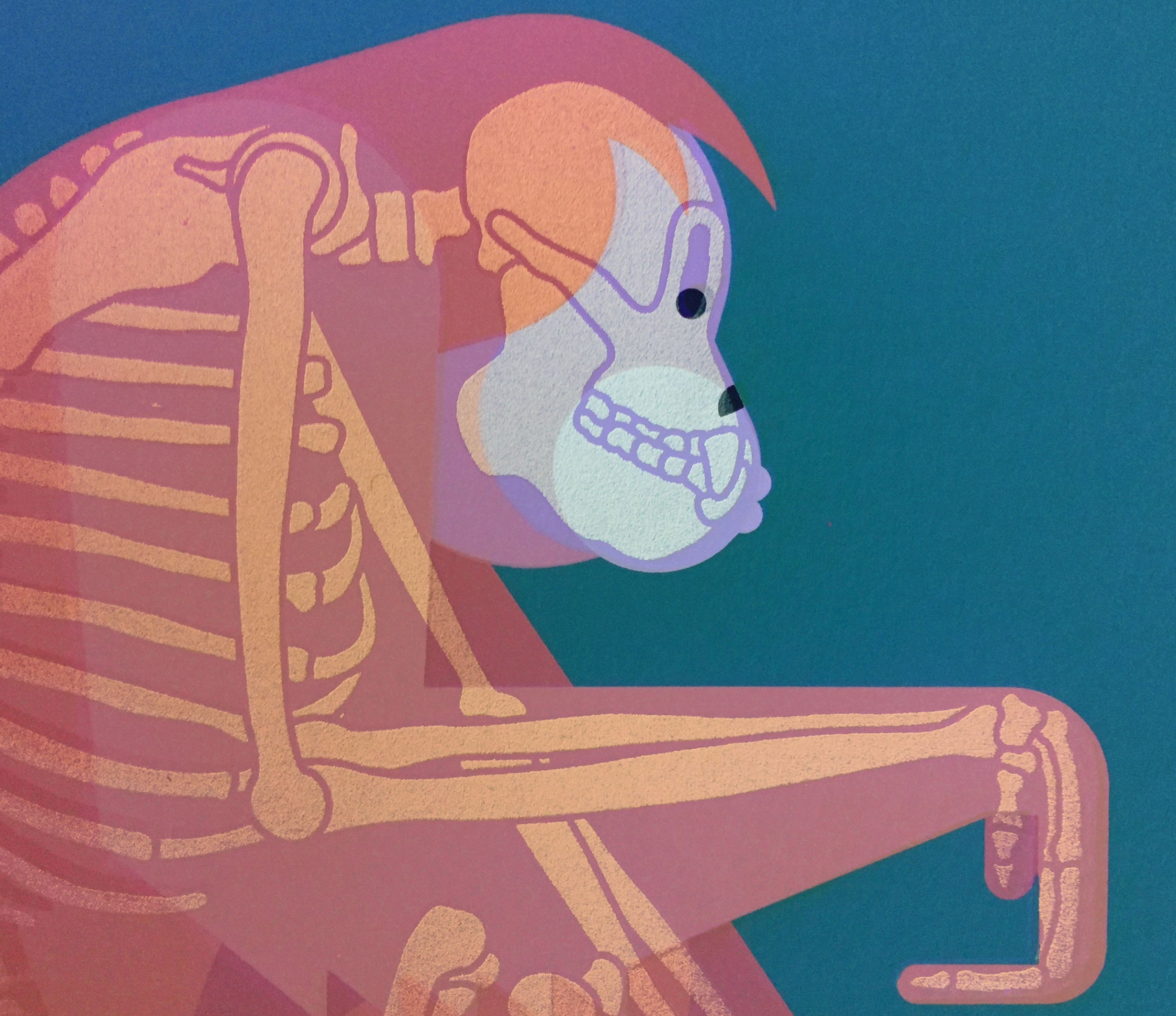 A large green banner leads the march, reading ‘It’s now or never for our children’s future’. We walk to the sound of beating drums and raised voices, chanting together in unison. We’re overtaken by a jungle explorer who wheels a giant orangutan sat on a boom box playing jungle beats. He’s accompanied by his young son, a cheeky little ape clasping a sign that reads ‘There is no Planet B’. 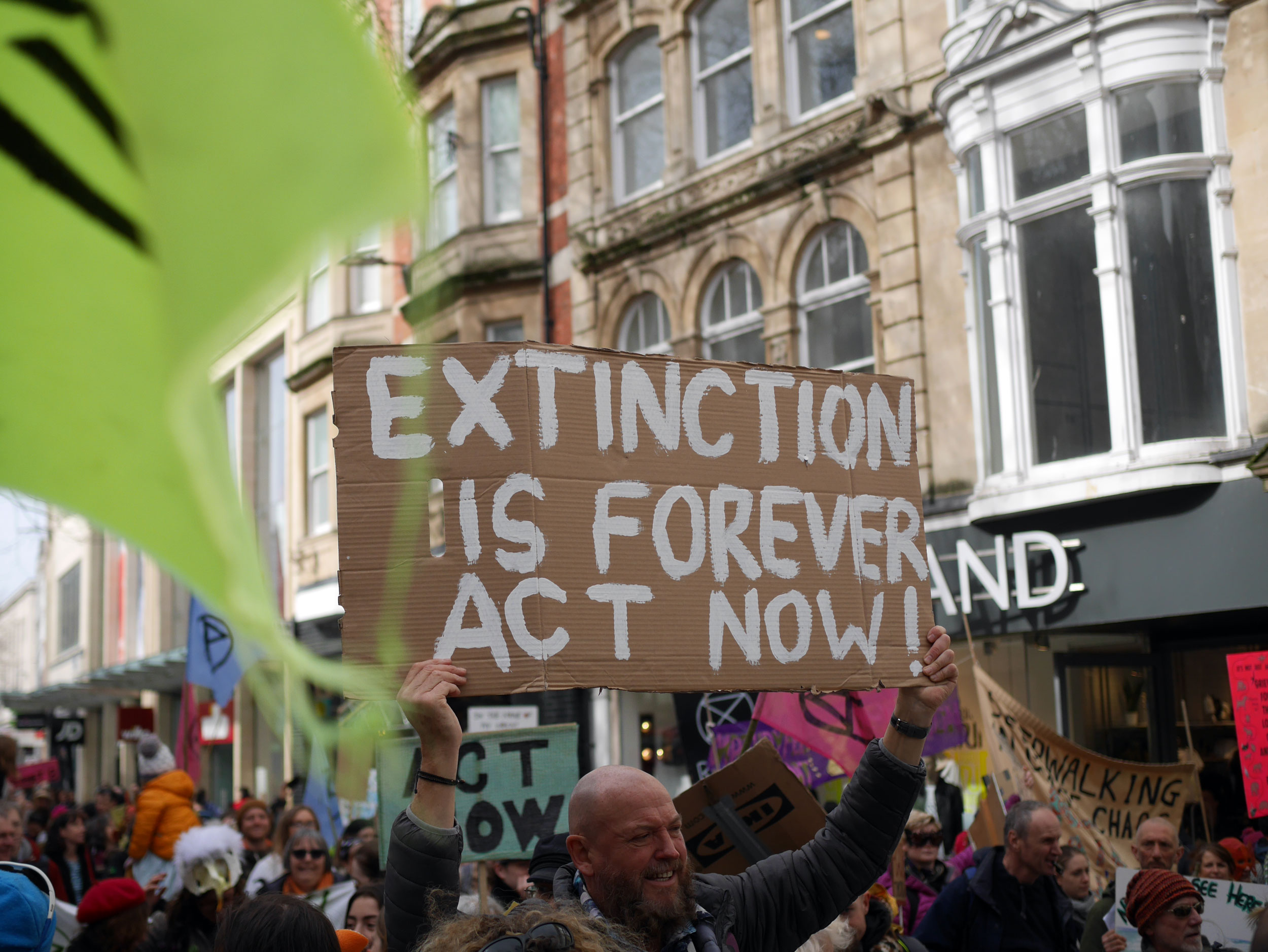 You can’t help but look around and smile; the positivity and energy in the air is undeniable. There’s children, parents, teenagers, elders – all generations united by the one undeniable fact that we need to make a radical change in our lives if we are to protect the natural world (and indeed ourselves) from extinction. It’s their future, after all.

Onwards. There is a staged sit down protest on St Mary Street, closing it to vehicles. This moves to Castle Street, bringing traffic to a grinding halt.

Some of the more radical protesters occupy Barclays bank in the city centre, spray painting the glass front, condemning them for their ties with the fracking industry. Police arrest the passionate activist, but decide to let her go. The crowd cheer, and the police are met with hugs and kisses. 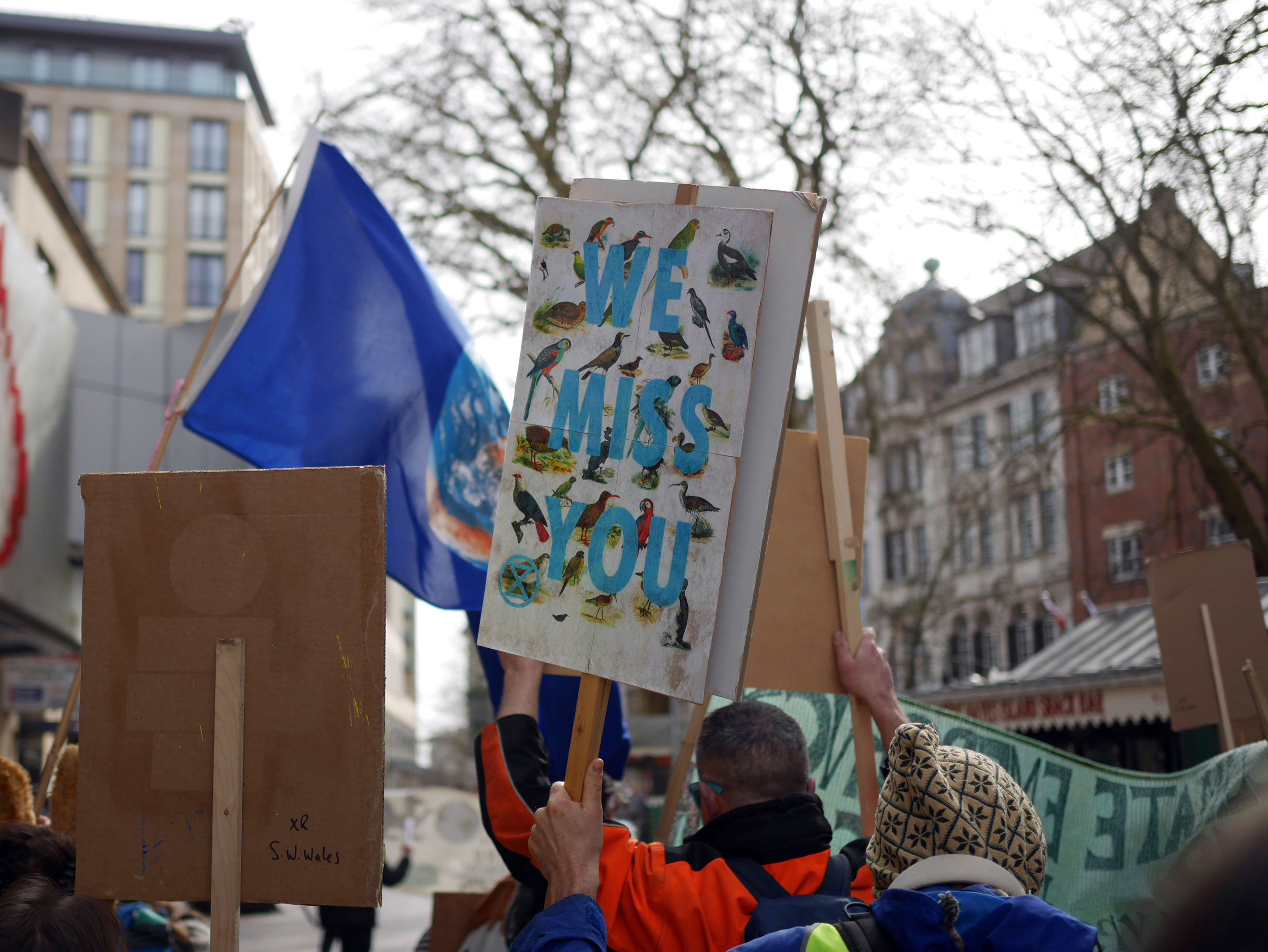 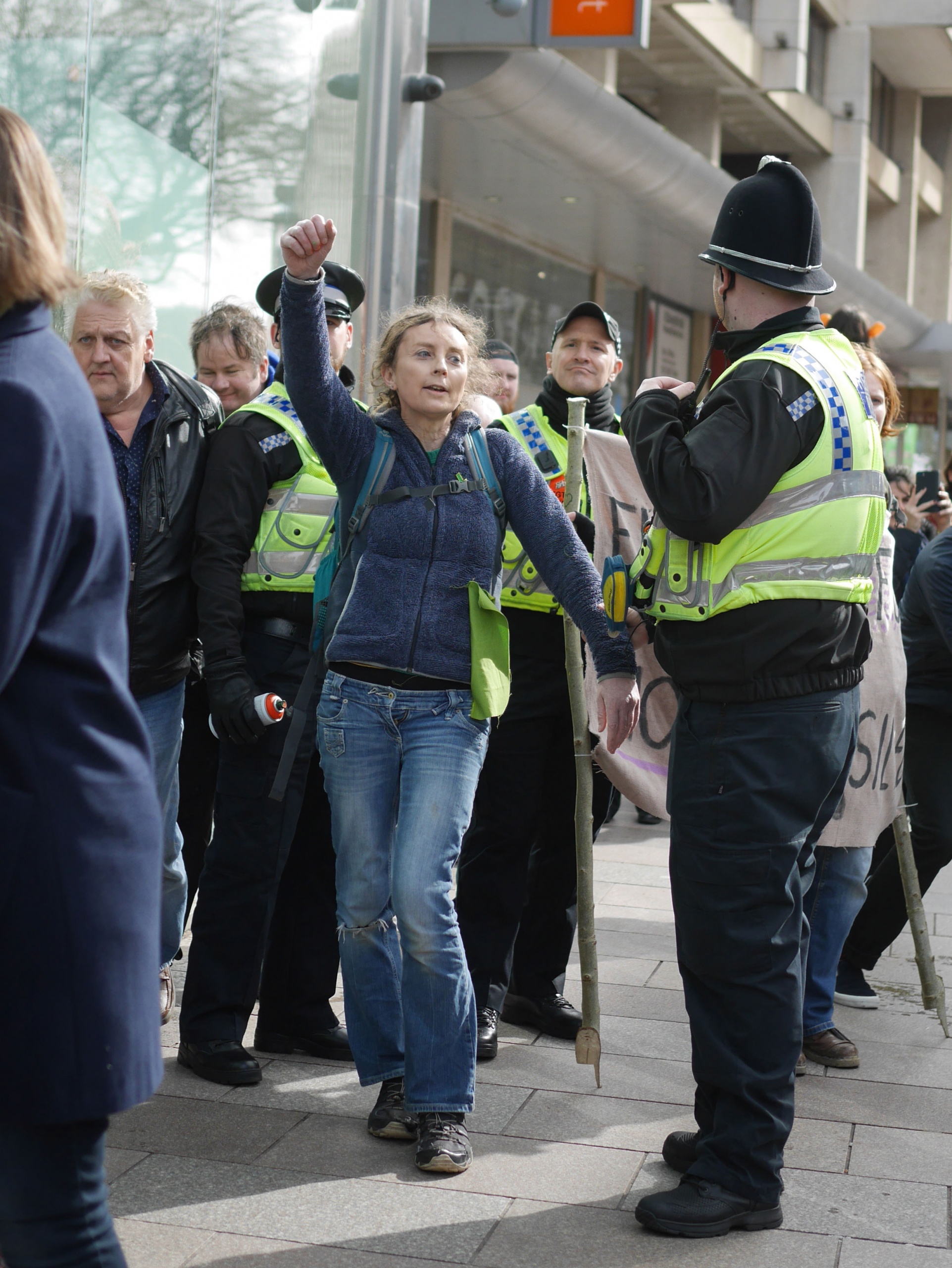 This particular blustery-but-sunny day is all about Welsh people addressing the Welsh Government, voicing warnings and addressing solutions to the climate emergency in this country. The crowd sit on the pavements in the heart of the city centre, where talks are given by leaders of the Green Party.

One banner reads ‘If we were coal miners we would be up to our knees in dead canaries.’ This resonates heavily with anyone who knows about the rich mining heritage of our country. It brings the message home.

Wales Green Party leader Pippa Bartalotti said: “We have proved today we can block any road we like. We won’t push it too far because the Welsh Government has been fairly proactive, but we need to start taking action. We want Wales to make it a national emergency and to invest in public transport. All dirty fuels must stop immediately. We need to have a massive and immediate insulation of all homes, funded in part from the government, and we need Wales to start building all new homes so they will be carbon zero or negative. It’s totally achievable and the time for talk is over.” 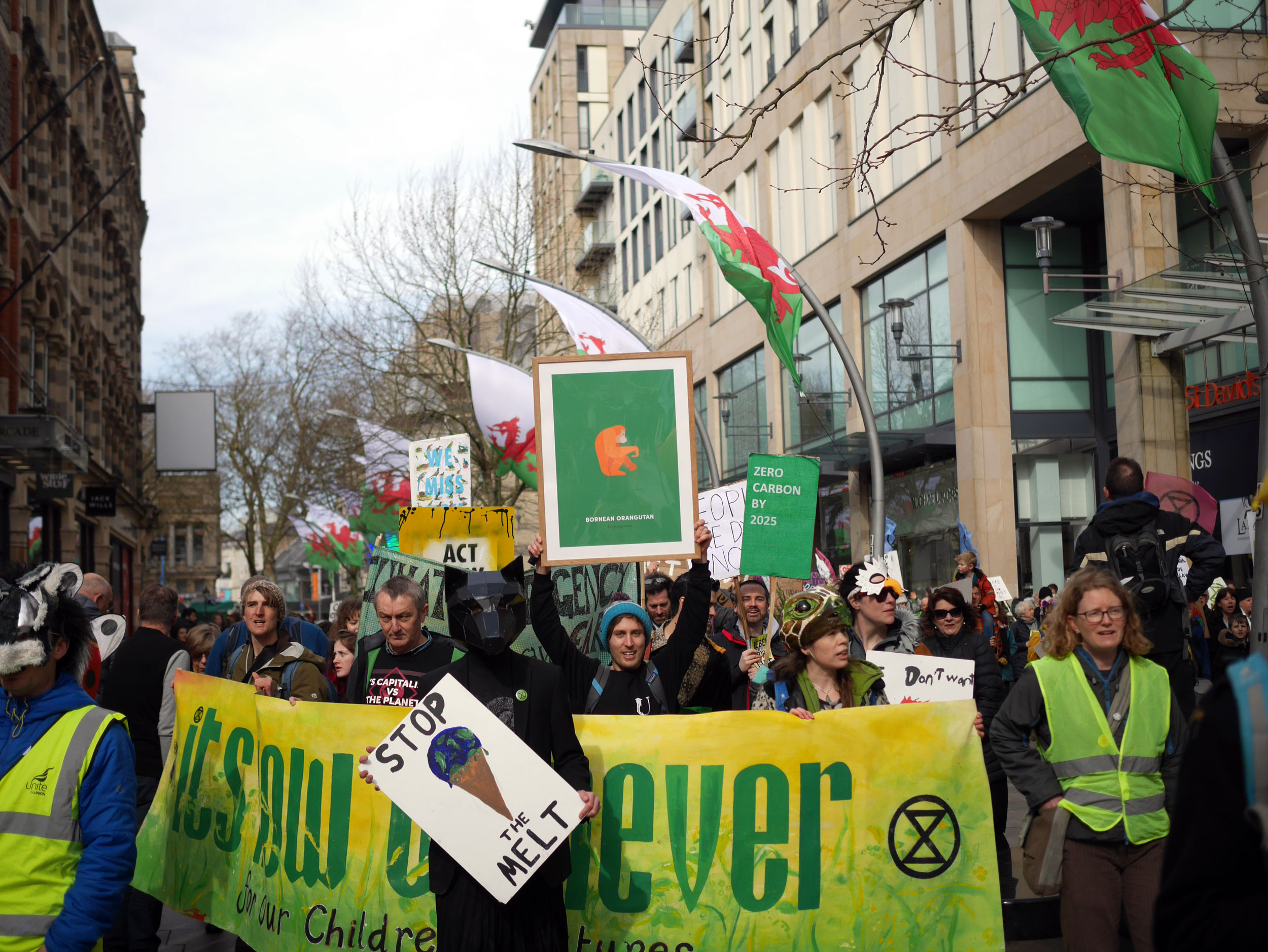 A sea of change is rising

Regardless of the outcome from the Welsh Government, today’s events are proof that the world is waking up and a sea of change is rising. At the time of writing, school climate marches are being held around the world, suggesting that movements like Extinction Rebellion could be the beginnings of a global revolution. We are moving past the age old debate of whether climate change is real, and addressing the challenge of how we can take action.

When we initially began Under the Skin in 2014, we had to tip-toe around the use of phrases such as ‘sixth mass extinction’ and ‘ecological collapse’ for fear of being labelled extremist. Speaking openly on the subject was often met with blank expressions, a change of topic or a shrug. Very rarely did people actually engage in what we were talking about. And nobody can be blamed for this. We too had the blinkers on before beginning our journey into conservation through the project.

But today we’re in a very different place. Once we felt alone, but now we are amongst a sea of everyday conservationists, united by passion and purposeful action. The spotlight has been cast, and thanks to radical organisations such as Extinction Rebellion, and continues to glow brighter as more and more people join the movement. 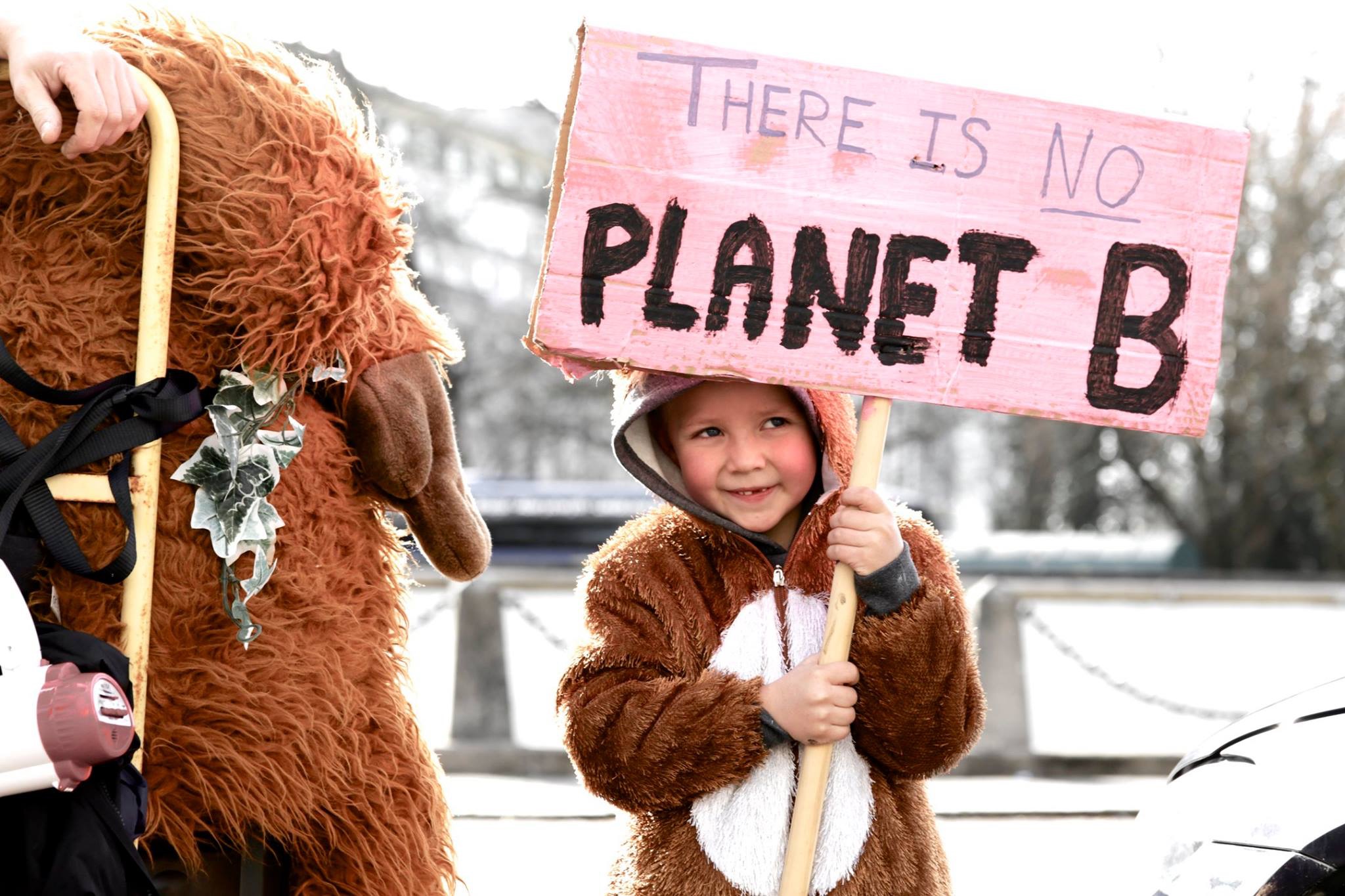 On this warming planet, there is no denying that the future for the younger generation of today is scary. But the positive side of the environmental crisis is that it is an opportunity to unite us all. Todays event, alongside the climate strikes happening around the world, are an example of this.

Yes, the world is waking up. People are coming together with a sense of purpose, and with this comes a strong sense of community.

There are so many ways to get involved. Whether you start a conversation, sign a petition or dress up as a bee and dance in an Extinction Rebellion protest, the collective actions of everyday conservationists will be key to ensuring the future of our planet.

The world is waking up. Join the movement.